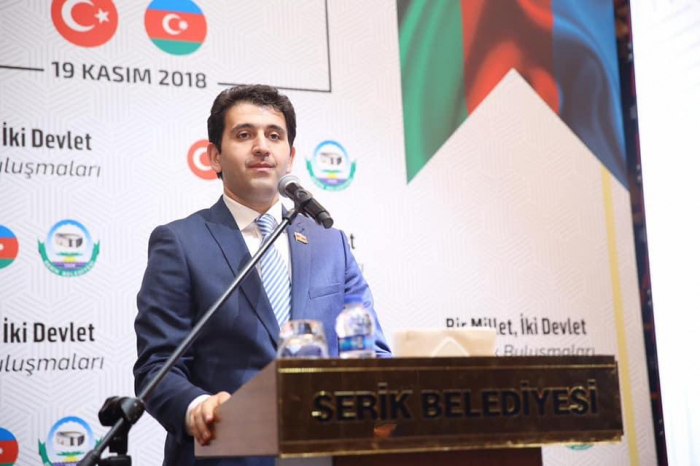 The fact that international events with global content are being held in Azerbaijan has already become a tradition, chairman of the Ganja City Organization of the ruling New Azerbaijan Party (YAP), member of the Azerbaijani-Turkish interparliamentary working group Nagif Hamzayev told reporters on Dec. 18.

The chairman noted that the 9th Plenary Session of the Parliamentary Assembly of Turkic Speaking countries (TURKPA) is held in the Azerbaijani parliament.

The chairmanship of the organization will be transferred from the Turkish Grand National Assembly to the Azerbaijani parliament at an important event, which will be celebrated as Azerbaijan’s another international success, Hamzayev added.

“Azerbaijan has rich experience of chairing authoritative organizations,” the chairman said. “The country has headed the UN Security Council, the highest body in the world. After the 7th Summit of the Cooperation Council of the Turkic-Speaking States, which was held in Baku, the 18th Summit of the heads of states and governments of the member countries of the Non-Aligned Movement was held, which is very significant both in terms of history and the number of its members.”

This is logical consequence of Azerbaijan’s growing influence in the international arena, its close participation in world processes and at the same time contribution to the restoration of peace, which adequately fulfills the mission of the country and leads successful organizations, Hamzayev noted.

“Oil and gas pipelines benefit Turkey as a transit country,” Hamzayev noted. “Energy projects implemented at Azerbaijan’s initiative have a positive impact on the export potential of Kazakhstan and Turkmenistan. The Turkish Culture and Heritage Foundation, operating under the Council of Turkey, was also created on Azerbaijan’s initiative.”

“This once again shows that Azerbaijan pays great attention not only to the political sphere, but also to economic issues of world significance, cooperation with Turkic-speaking countries and their involvement in international projects,” the chairman said.

The 9th plenary meeting of the Parliamentary Assembly of TURKPA in Baku, the chairmanship of the organization in Azerbaijan will contribute to the further growth of Azerbaijan’s role in the formation of the Turkic Union, cooperation and expansion of ties between Turkic states, Hamzayev added.