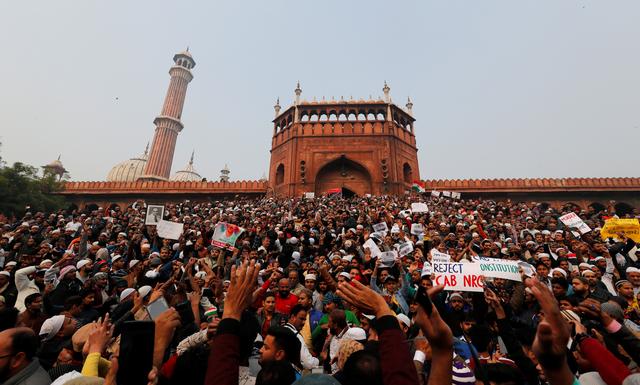 Chants of “Remove Modi” filled the air after Friday prayers at the historic Jama Masjid as protesters gathered to march toward New Delhi’s center, one of many demonstrations across India over a citizenship law critics say discriminates against Muslims.

While the latest rally in the capital started peacefully, police herded away some 100 protesters picketing parliament. Many other protests during the past week have turned violent, with at least seven people killed.

Police in the southern coastal city of Mangaluru imposed a three-day curfew on Friday after the latest two fatalities.

In Uttar Pradesh, India’s most populous state, authorities said they shut down the internet in large parts of the state to prevent inflammatory material being circulated. News channel NDTV broadcast images from the state of a torched police van, and officers chasing protesters throwing stones and wielding sticks.

The backlash against the law pushed through parliament by India’s Hindu nationalist government on Dec. 11 marks the strongest show of dissent since Prime Minister Narendra Modi was first elected in 2014.

The new law makes it easier for people from non-Muslim minorities in Afghanistan, Bangladesh and Pakistan who settled in India prior to 2015 to obtain Indian citizenship.

Critics say the exclusion of Muslims is discriminatory, and the award of citizenship based on religion undermines India’s secular constitution.

From college students and academics to artists and opposition party workers, thousands of people have come out to protest against a law that many believe is part of an unspoken agenda to divide India along communal lines. Muslims make up 14% of India’s population.

On the street below the sprawling steps of Jama Masjid, Muslims were joined by people of other faiths, including a large number of Dalits, the community that ranks at the bottom of the Hindu caste hierarchy.

Police and paramilitary were deployed outside the mosque and the atmosphere was tense as more than a thousand people joined the rally, Reuters witnesses said. Several of them carried copies of India’s flag and the constitution, which states India is a secular republic.

“We will fight till this law is rolled back. We will not back down,” said Shamim Qureishi, a 42-year-old man chanting slogans outside the mosque.

Aside from targeting Modi, protesters also vented their fury at Amit Shah, the interior minister who had tabled the bill.

Members of the women’s wing of the main opposition Congress party demonstrated outside Shah’s home in Delhi on Friday.

In Uttar Pradesh, a tinder-box for communal tensions between Hindus and Muslims, authorities arrested over 100 people, largely from the Muslim-majority areas where protests were held Thursday.

The government has blocked mobile internet and text messaging services in 20 districts there until Saturday.

Awanish Kumar Awasthi, the state official issuing the order, said the move was aimed at preventing the spread of inflammatory material that could worsen the law and order situation.

In the southern coastal city on Mangaluru, authorities imposed a curfew until midnight on Dec. 22, after two people died in clashes between police and stone-throwing protesters.

A police spokesman said 20 officers were injured in the Mangaluru clashes. “Police forces are deployed across the city and the law and order situation right now is quite peaceful and everything is under control,” said police spokesman Guru Kamat.

Previously, some of the most violent protests have been in Assam, a northeast state bordering Bangladesh. Assamese people are angered by the encouragement being given to immigrants, regardless of their religion.