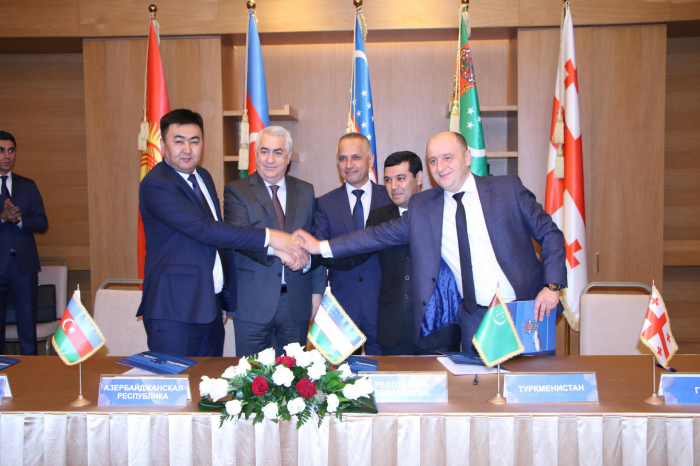 The first multilateral meeting of the heads of railway agencies of Azerbaijan, Georgia, Kyrgyzstan, Turkmenistan and Uzbekistan on the development of the international multimodal route was held in Tashkent, AzVision.az reports citing Trend.

At the meeting, issues were discussed regarding the creation and adoption of the regulation on the coordination committee for the development of the transport corridor, single tariffs along the route and the conditions for cargo transportation, and the relevant decisions were made.

The launch of a test transit container train, as part of the multimodal project, is scheduled for the first quarter of 2020.

Speaking about the importance of the transport corridor, Chairman of Azerbaijan Railways CJSC Javid Gurbanov said that the participating countries will benefit from it.

After the speeches, multilateral and bilateral protocols were signed among the participating countries.

As part of the session, a meeting was held between the heads of the railway agencies of Azerbaijan and Uzbekistan - Javid Gurbanov and Khusnitdin Khasilov.

The parties discussed the development of cooperation in the transport sector, the effective use of international transport corridors and the increase in transit cargo transportation.

It was also noted that from January through November 2019, the cargo turnover between Azerbaijan and Uzbekistan amounted to 127,000 tons, which is 18,100 tons more compared to the corresponding period last year.

The parties agreed to take measures aimed at the mutual increase in cargo volumes and the development of this route.