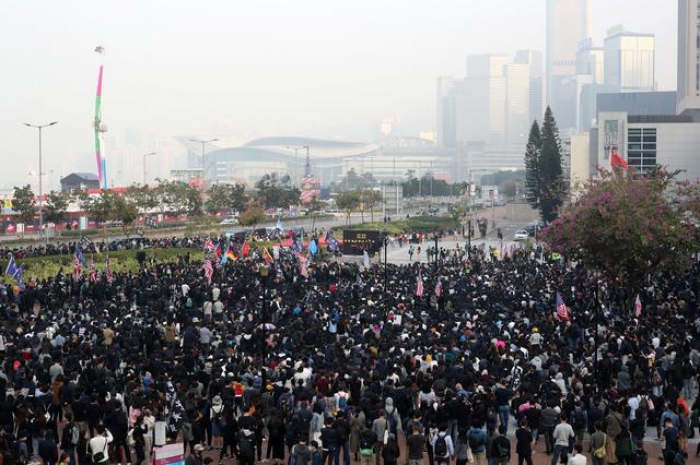 More than 1,000 protesters, many in surgical masks and balaclavas, filled a harborside plaza near Hong Kong’s financial district late on Monday to demand full democracy and an independent inquiry into alleged police brutality, Reuters report.

As Hong Kong gears up for Christmas celebrations, the protesters plan wildcat gatherings in prime shopping malls and a ‘silent night’ rally on Tuesday evening.

The demonstrators gathered at the harborside on Monday sang “Glory to Hong Kong”, a protest anthem, and shone lights from their mobile phones.

Henry, a 28-year-old banker, said he was in the plaza to protest a recent police shutdown of Spark Alliance, a fund-raising platform for protesters. He wore a Guy Fawkes mask from the movie “V for Vendetta”, which glowed green in the dark.

“The Hong Kong government is ruining our reputation as a financial center. How can they say we are a place for finance if they can shut down the fund so unreasonably?” he said.

The protests, now in their seventh month, have lost some of the scale and intensity of earlier confrontations. Police have arrested more than 6,000 people since the protests escalated in June, including more than 52 over the past weekend.

Many Hong Kong residents are angry at what they see as Beijing’s meddling in the freedoms promised to the former British colony when it returned to Chinese rule in 1997.

China denies interfering and says it is committed to the ‘one country, two systems’ formula put in place at that time and has blamed foreign forces for fomenting unrest.

MALL PROTESTS
On Sunday, a peaceful protest ended in clashes when black-clad, masked demonstrators attacked police with kicks and punches and threw bricks and bottles. Police responded with bursts of pepper spray. One officer drew his pistol and pointed it towards a crowd but didn’t fire, Reuters witnesses said.

Protesters plan to gather in five malls on Christmas Eve and will count down to Christmas near the harbor front in the bustling Tsim Sha Tsui district, social media posts say. More protests are planned for Christmas Day on Wednesday.

The Civil Human Rights Front, which has organized some of the biggest marches involving more than a million people, has also applied to stage another march on New Year’s Day.

Some people taking part in Sunday’s protest called for Hong Kong’s independence from China and removed a Chinese flag from its pole, drawing condemnation from the government.

Both the Beijing and Hong Kong governments have made clear such separatist rhetoric will not be tolerated.

“Advocating Hong Kong independence ... is not conducive to the overall and long-term interest of Hong Kong society. It is also contrary to the established basic policies of the People’s Republic of China regarding Hong Kong,” the city government said in a statement overnight.

While police, including the leader of a major police union, have referred to the protesters as cockroaches, protesters routinely call the police dogs.

On Monday, public broadcaster RTHK broadcast a video of a police public relations officer playing down the significance of the term cockroach.

The officer said the term should not be “over-interpreted” because while it may be negative, another way to understand it was that cockroaches were “full of vitality”.