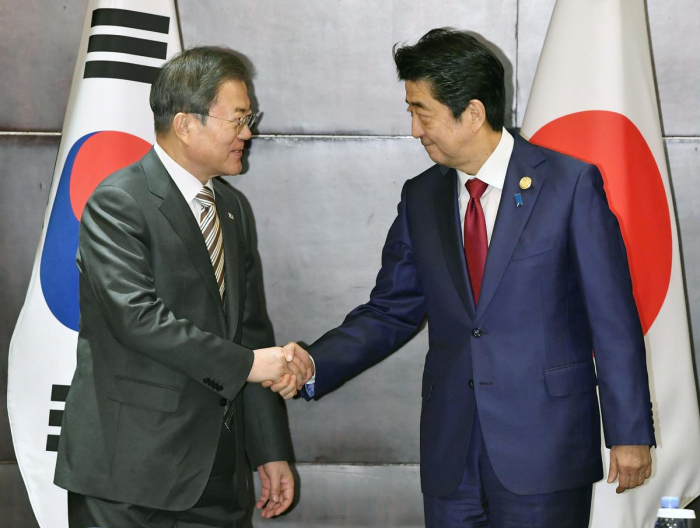 The leaders of Japan and South Korea met for the first time in more than a year on Tuesday and stressed the need to improve ties after the worst period of tension between their countries in decades, officials from both sides said, AzVision.az reports citing Reuters.

South Korea’s President Moon Jae-in and Japan’s Prime Minister Shinzo Abe met on the sidelines of a trilateral summit with Chinese Premier Li Keqiang in the Chinese city of Chengdu, with tension over stalled denuclearization talks between North Korea and the United States the main issue.

For Moon and Abe it was also a chance to begin patching up ties that plummeted after South Korea’s Supreme Court last year ordered Japanese firms to compensate some South Koreans forced to work for them during Japan’s 1910-45 colonial rule.

Japan then imposed restrictions on the export to South Korea of high-tech materials used in the manufacture of chips, compounding their dispute which threatened to undermine security cooperation between the two U.S. allies.

The two leaders agreed to meet more often despite differences over history and trade, Moon’s spokeswoman, Ko Min-jung, told a briefing in Chengdu, adding they both wanted to resolve differences through dialogue.

Abe, stressing his desire to improve relations through candid discussions, said close security cooperation with the United States was “extremely important” in dealing with North Korea.

“On some issues, although there was a tense atmosphere, they were able to have a candid exchange of views. Without this, they agreed, there would be no way to find a resolution,” Okada told a briefing in Chengdu.

Moon expressed hopes for an early solution to their differences, while offering congratulations to Abe for having become the country’s longest-serving premier last month.

“We’re not in a relationship that can set the two apart even when there’s some discomfort for a while.”

The two shook hands and smiled slightly before their 45-minute meeting, longer than the planned 30 minutes.

South Korea last month made a last-minute decision to maintain an intelligence-sharing deal with Japan.

The pact is important for trilateral security cooperation with the United States.

But despite South Korea’s decision to maintain it, tensions linger, particularly over the emotive issue of Japanese compensation for its wartime rule.

Japan considers the issue of wartime forced workers to have been resolved in a 1965 bilateral treaty, and says the South Korean court ruling violates international law.