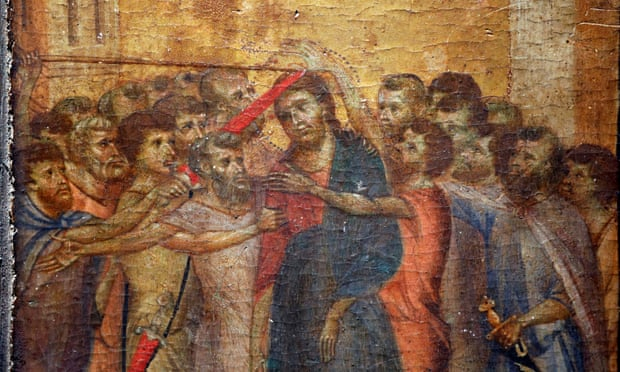 France has blocked the export of a tiny early Renaissance masterpiece found in a French woman’s kitchen that fetched more than €24m (£20.5m) at auction and became the most expensive medieval painting ever sold, the Guardian reported.

Christ Mocked, by the 13th-century Florentine painter Cimabue, had hung for decades above a cooking hotplate in the kitchen of a 1960s house near Compiègne, north of Paris, before it was spotted by an auctioneer who had come to value furniture for a house move.

But after the unsigned work was bought at auction in October by US-based private collectors, the French state this week classified the painting as a “national treasure” and refused it an export certificate. The move gives the French state 30 months to attempt to find funding to acquire the picture itself.

The culture ministry said it would work to acquire the painting so it could join another much larger Cimabue work – the four-metre high Santa Trinita Maestà – held by the Louvre in Paris, the world’s most-visited museum.

The culture minister, Franck Riester, said the export block “gives us the time to mobilise all efforts for this exceptional work to enrich our national collections”.

When 800 people gathered at an auction hall in Senlis in autumn, with the crowd falling silent during the nail-biting final moments, the bidders were not officially named. But it was swiftly reported that US-based Chilean collectors behind the Alana collection – a key collection of Italian Renaissance art – had won the bidding. They were reported to have outbid New York’s Metropolitan Museum of Art.

The picture, measuring just 26cm x 20cm, had been initially estimated at between €4m and €6m. But it fetched €19.5m under the hammer, rising to more than €24m when fees were included.

France’s move to block the export complicates matters for the family of the woman in whose home the picture had hung. They had remained anonymous in what was seen as an improbable saga of overnight riches.

The picture had never attracted much attention from the woman, in her 90s, or her relatives, who thought it was simply an old icon from Russia. It might have ended up in a bin during the house move this summer had it not caught the eye of an auctioneer.

But Agence France-Presse reported this week that the woman, who had moved into a retirement home, died shortly after the painting was auctioned. Her family, who must continue to pay high fees to insure the work until the sale is finalised, could now have to negotiate with tax officials over the timings of inheritance tax payments while the sale is in effect suspended for almost three years.

Cimabue, also known as Cenni di Pepo, was one of the pioneering artists of the early Italian Renaissance. Only 11 works painted on wood have been attributed to him, none of them signed.

Art experts at Turquin in Paris used infrared reflectography to confirm the piece was part of a larger diptych from 1280, when Cimabue painted eight scenes of the passion and crucifixion of Christ. Each of the two panels in the diptych had four scenes.

Two scenes from the same diptych, known as The Virgin and Child with Two Angels and The Flagellation of Christ, already hang in the National Gallery in London and the Frick Collection in New York.

Cimabue, who taught the Italian master Giotto, is widely considered the forefather of the Italian Renaissance. He broke from the Byzantine style popular in the Middle Ages and began to incorporate elements of movement and perspective that came to characterise western painting.