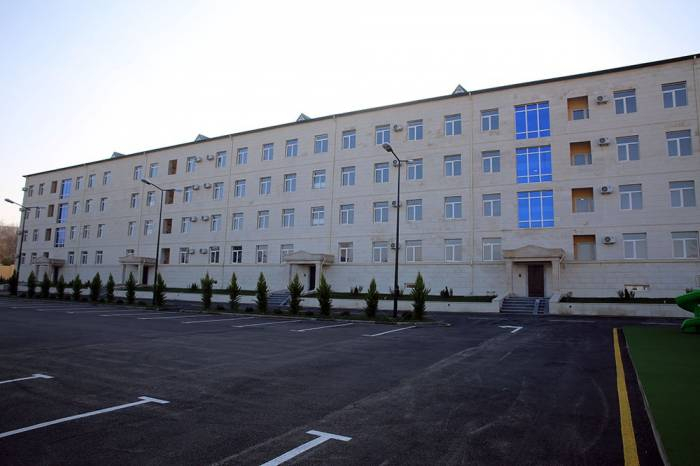 In accordance with the instructions of the President of the Republic of Azerbaijan, the Supreme Commander-in-Chief, Mr. Ilham Aliyev, regarding the improvement of the social conditions of the military personnel of the Armed Forces, the opening of the next newly constructed residential building for servicemen was held.

The Minister of Defense, Colonel General Zakir Hasanov have met with servicemen and their families at the opening ceremony, and congratulated the participants on behalf of the leadership of the ministry.

The Minister of Defense emphasized that the ongoing work is a vivid example of the care and attention of the head of state to the Armed Forces.

The Minister stressed that the commissioning of new service apartments is an integral part of the work to improve the social conditions of the servicemen. This as a whole is a continuation of the activities carried out in the field of strengthening housing support for military personnel in the Azerbaijan Army.
The Minister of Defense, noting that due to the care of the Supreme Commander-in-Chief of the Armed Forces, servicemen have been periodically provided with permanent and service apartments in recent years, informed that these works will also continue next year.

During familiarization with the new building, it was noted that the four-story, four-block 44-apartment building consists of fully renovated apartments and is equipped with all communication lines.

It was reported that a water pumping station, swimming pool, and substation were built for the building, gas, water, electricity meters were installed, the apartments were equipped with kitchen furniture and air conditioning. The territory is fenced and landscaped, asphalt is laid, a town for children has been built, sports facilities have been installed. All the necessary conditions have been created for the effective recreation of families of servicemen.

Servicemen provided with apartments expressed their gratitude to the Supreme Commander-in-Chief of the Armed Forces, Mr. Ilham Aliyev for the care shown to them.

After handing the apartment keys to the servicemen, the leadership of the Ministry of Defense got acquainted with the created conditions and inquired about the concerns of their families.