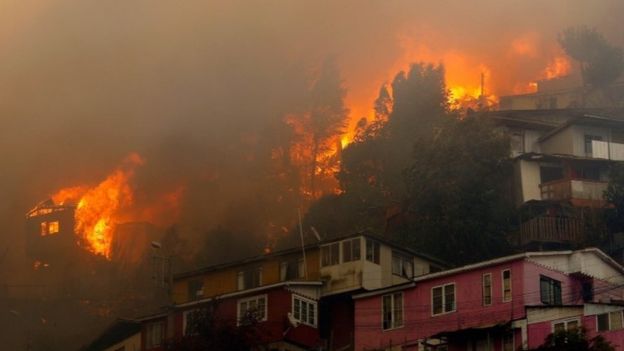 At least 150 houses have been destroyed by fast-moving woodland fires in the Chilean city of Valparaíso.

The fires, which spread through the Rocuant and San Roque hills, reached two poor residential areas and were still burning on Christmas Day. There have been no reports of any casualties.

Power was cut to about 90,000 customers in the area as a precautionary measure. Two schools were turned into shelters for the affected residents, who were forced to flee in the middle of Christmas Eve celebrations.

Mayor Jorge Sharp said a state of emergency had been declared in the city, some 100km (62 miles) from the capital, Santiago.

A video posted on social media showed a car next to where a fire started. Prosecutors were investigating the footage as well as reports from residents that cars were seen in the hills affected moments before the fires began, Emol website reports.