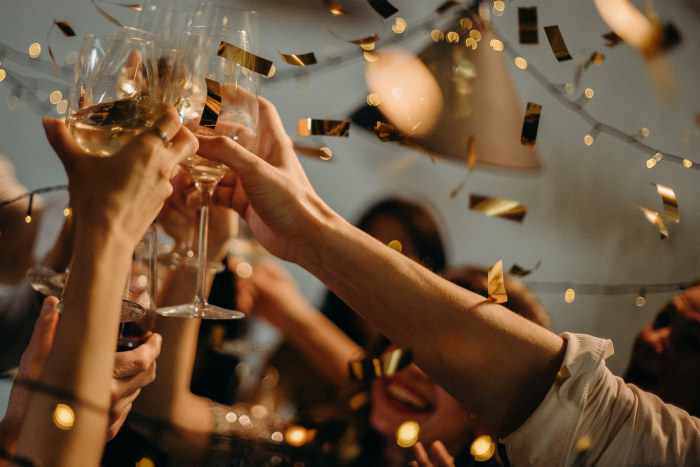 The start of a new decade is here and most of us are ready to pop open bottles of champagne and celebrate. However, not everyone celebrates with alcohol. In fact, many people around the world don't even celebrate at midnight on January 1.

New Year's looks different depending on where you're from and what religion and customs you follow. For the Chinese Lunar New Year, red envelopes filled with money are handed to family members and streets close down for colorful parades that feature lion dancers and fireworks. During Rosh Hashanah, the Jewish New Year, people eat apples dipped in honey and play a trumpet-like instrument called a shofar to inspire growth and soul-searching in the year ahead.

We explored how several cultures celebrate the new year. Keep reading to learn more about each of these traditions. 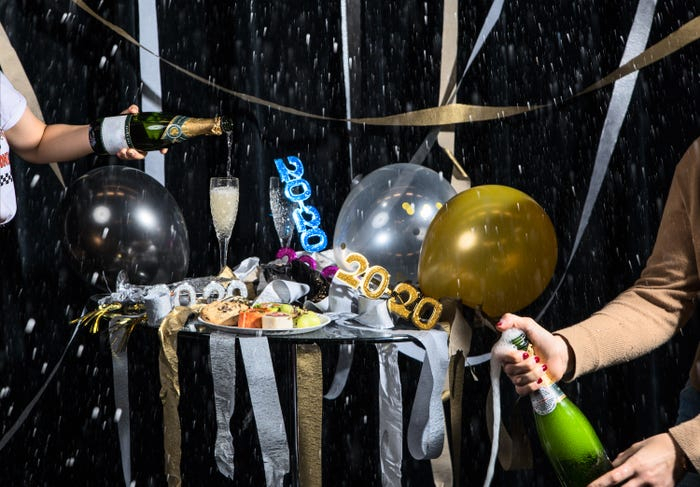 The New Year's we're most familiar with follows the Gregorian calendar. Since Julius Casear's time, January has been the mark of the new year, but it hasn't always been that way.

There are celebrations dating back to the Mesopotamians on or around March 20, which was based on the vernal equinox. In fact, until the Gregorian calendar was officially implemented by Pope Gregory XIII in 1582, the date tended to change frequently.

Resolutions are made, friends and family gather to welcome another year of new beginnings, and couples share a kiss at midnight. 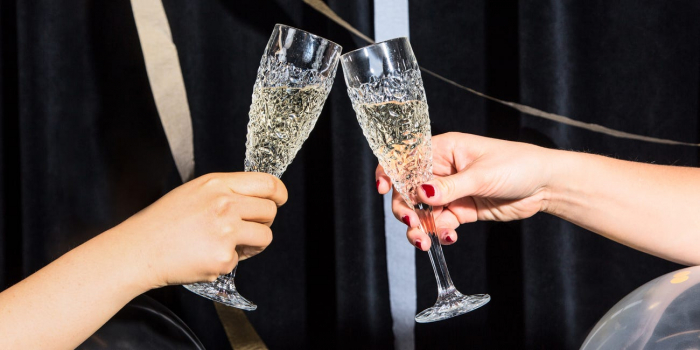 According to historians, the tradition of kissing at midnight has several possible origins, including Renaissance masquerade balls, English and German folklore, and the ancient Romans' pagan celebration called Saturnalia.

Each year, over a million people head to New York City's Times Square to watch the iconic ball drop. The ball has been a tradition since 1907 and has been redesigned and rebuilt several times over the years. The current version weighs a whopping 11,875 pounds and is covered with over 2,000 Waterford Crystal triangles. 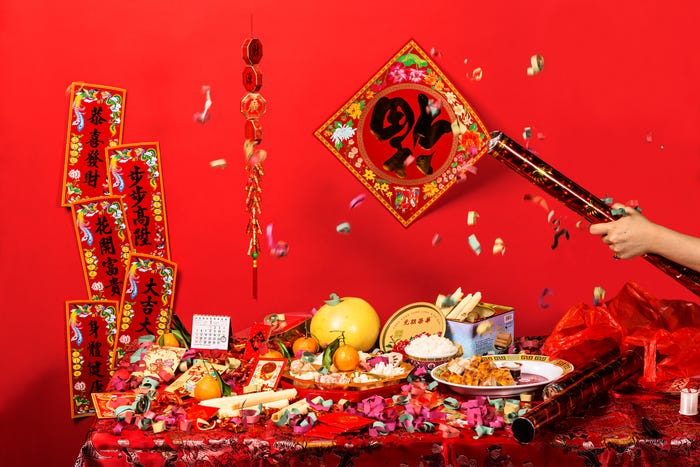 The exact day of the Lunar New Year changes every year and does not align with the Gregorian calendar.

There are many ethnicities in China, each celebrating the Lunar New Year in their own unique way. In preparation for the holiday, couplets bearing well wishes for good health, fortune, and luck are hung around the house — often in entryways to invite the wishes into the home.

In Chinatowns across the US, multiple streets are closed down for parades and lion dancers go door-to-door to shops and restaurants, bringing good luck for the coming year. Street vendors sell confetti poppers to pedestrians who launch them into the air, covering the streets with bright vivid colors.

Firecrackers and fireworks are lit to scare away evil spirits from the previous year, making way for the new year.

Red envelopes called 'hong bao,' are filled with money and handed out to friends and family. 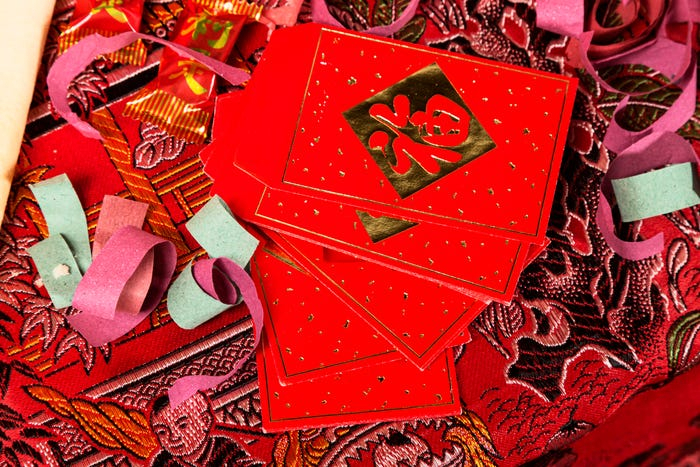 Traditionally envelopes are red, but they also come in a variety of other designs and colors with different well-wishes or the year's zodiac printed onto them.

There is no rule for who receives the envelopes. Some say that married people do not receive any money and only hand it out to young children and unmarried young adults. Others say you stop receiving red envelopes once you start making your own money. In some instances, a boss will hand out envelopes to their employees and their employees' children. 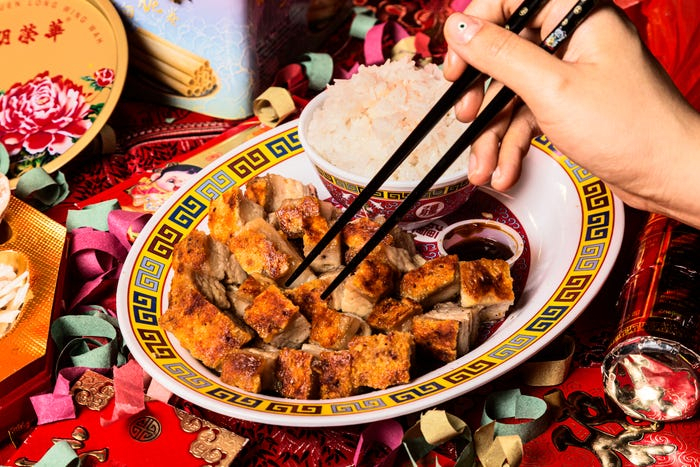 On New Year's Eve, Chinese families have lavish dinners. For most Cantonese families, common dishes include roasted meats, arrowroot, a vegetable stir-fry, and a form of seafood like a whole fish or shrimp with their shells, heads, and antennae still on. Northern Chinese families often celebrate with steamed dumplings eaten at midnight on the first day.

On New Year's Day, the first meal for Cantonese families is vegetarian with the main dish being "jai," a mix of stir-fried vegetables that varies between families. Stemming from Buddhist tradition, vegetables are believed to cleanse and purify the body.

A 'Tray of Togetherness' is often placed on the table to welcome visiting guests. 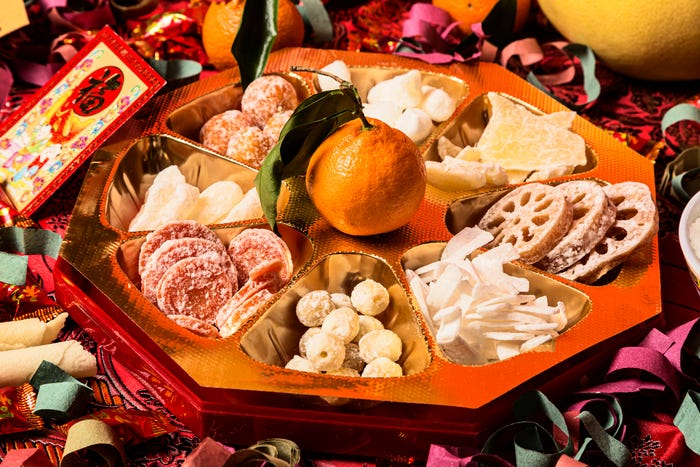 The "Tray of Togetherness" is a platter of sweets — often sugared dried fruit, candy, or a variety of nuts — meant for visiting guests to snack on during the New Year. Traditionally, each item symbolizes good fortune, health, and happiness.

Tangerines with the stem attached represent longevity and are placed around the house and given to family members. Large oranges and pomelos are also given as gifts. 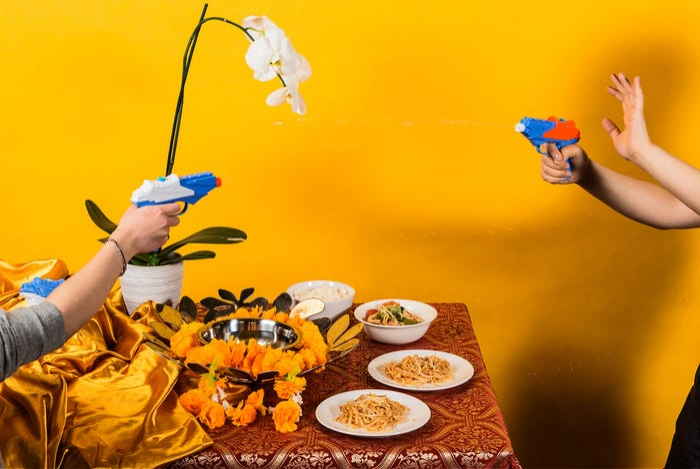 Commercially, Songkran is celebrated with a water festival where people throw water at each other either at home or in the streets. 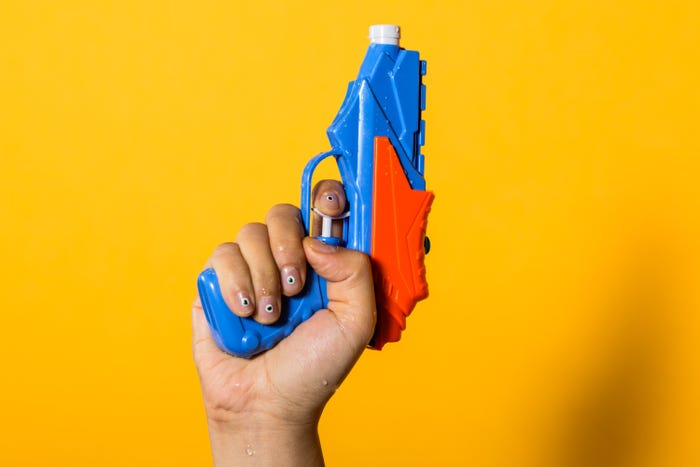 Water guns are often used, including by tourists who take part in the festival during their time in Thailand. The water is a symbol of washing away the bad from the previous year as you move into the new year.

Colorful clothing that you can get wet is worn this time of year since you will likely be splashed with water in the streets.

Traditionally, young people visit older family members and perform a water ceremony by pouring water over the elders' hands and feet as a sign of respect. 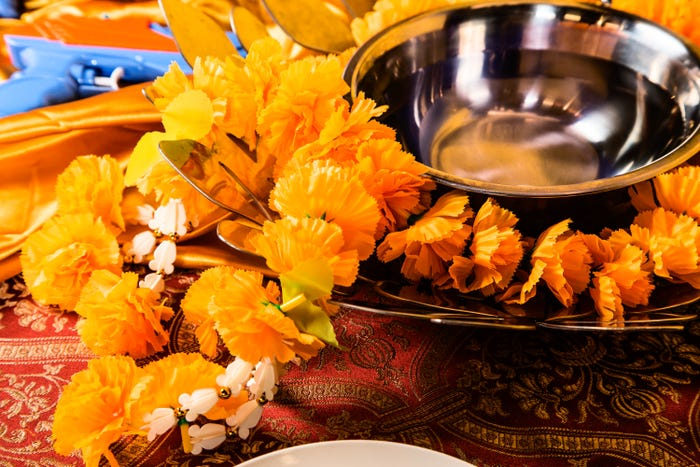 Families will visit temples to pay further respects, as well as give food to monks. On temple grounds, families take part in the traditional activity of building sand pagodas.

Sand pagodas are large piles of sand decorated with flags, flowers, and sometimes with incense.

Muharram, the Islamic New Year, starts on August 21, 2020 and ends the evening of September 18. 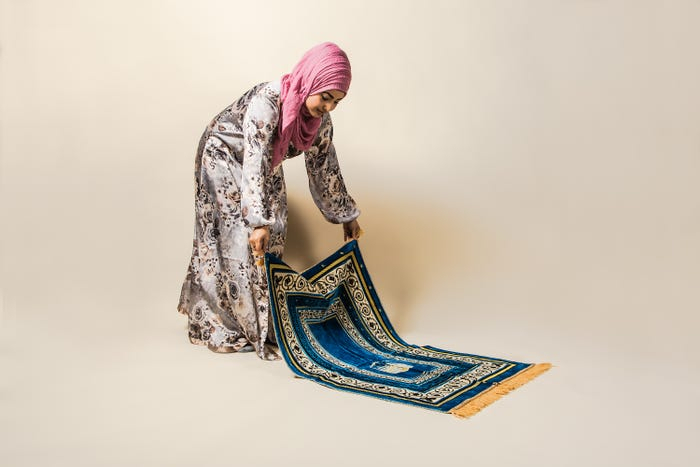 Muharram, which means 'forbidden,' marks the first month of the Islamic calendar. It is often considered the second holiest month outside of Ramaḍān, which begins in April.

Traditions and customs for the Islamic New year vary for Shia and Sunni Muslims, the two major sects of Islam.

In this photo series, we are mainly referencing the Sunni Muslim traditions.

The majority of people will celebrate the holiday by attending prayer sessions in their mosque and spending time with family. 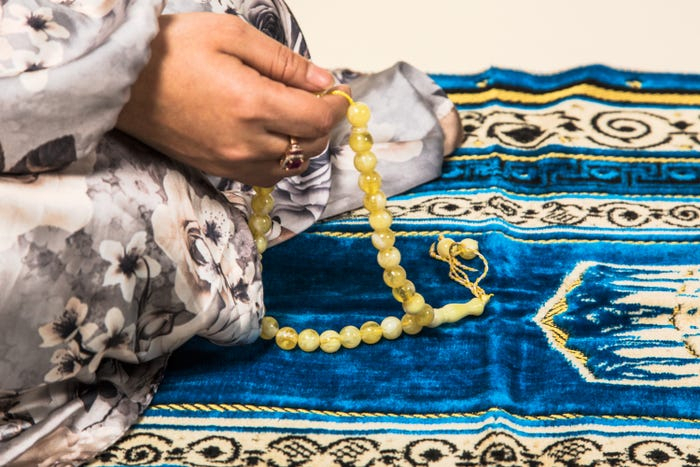 Some Muslims fast on or around the 10th day of Muharram, also known as the 'Day of Ashura.'

For Sunnis, Ashura marks the day that God saved Moses and his followers from the Pharaoh of Egypt.

The main emphasis is on self-reflection, remembrance, and gratitude. 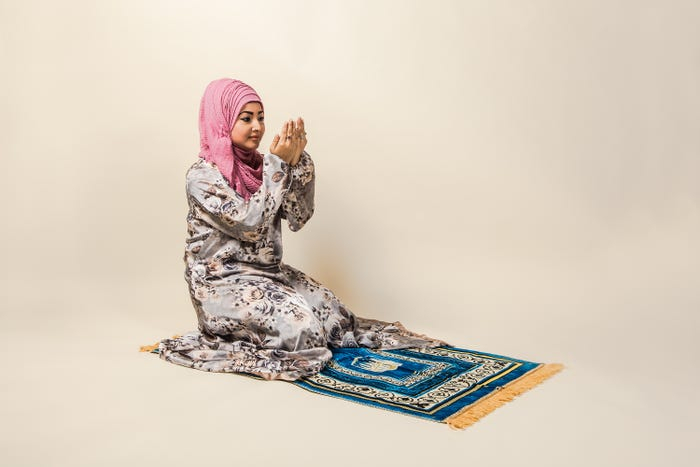 The fast is broken with water and foods like nuts, dates, and yogurt. 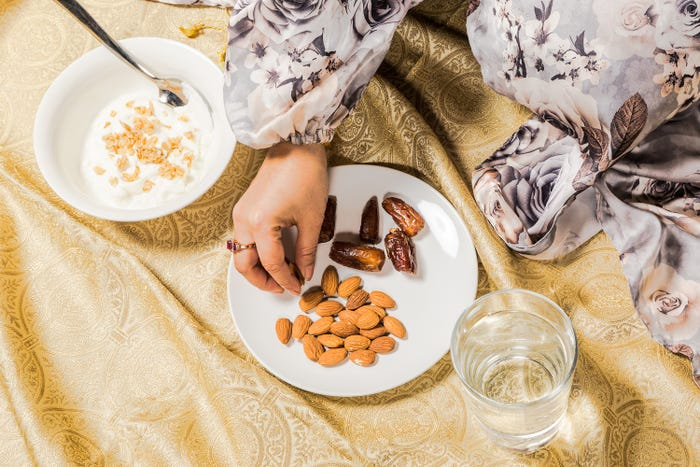 Rosh Hashanah, the Jewish New Year, begins on the evening of September 18, 2020. 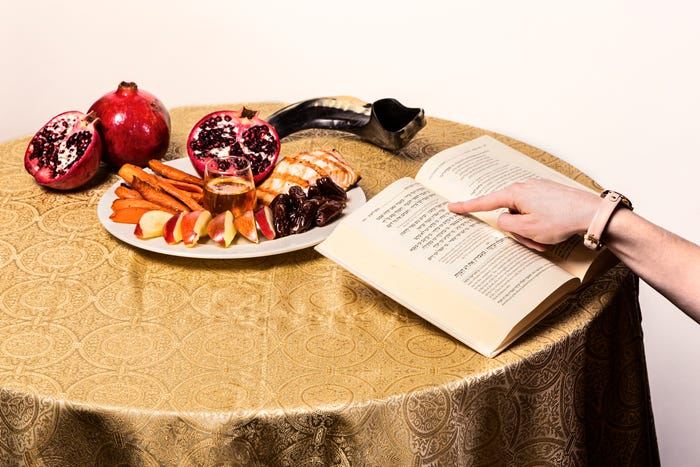 Rosh Hashanah is celebrated on the first and second day of the Hebrew lunar month of Tishrei. Jewish holidays follow a lunar calendar, so the dates in the Gregorian calendar vary.

An assortment of symbolic foods are eaten on the holiday as expressions of wishes for the new year. 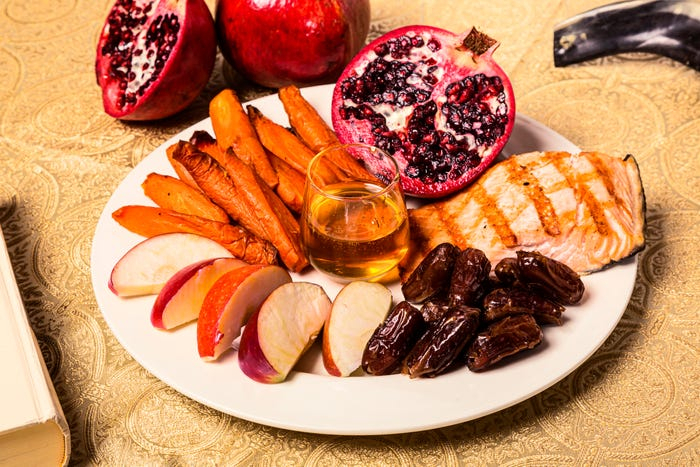 Pomegranate seeds, which are numerous inside of a ripe fruit, are eaten with the intention of having a year filled with many good deeds. Since Rosh Hashanah literally means "head of the year," a fish head is eaten in the hope of being "like the head of a fish and not the tail" — leaders, not followers.

Some people even like to add their own symbolic foods with clever explanations. A particularly popular and groan-worthy pun is eating celery with peanut butter and raisins to wish for a "raise-in celery."

Apples dipped in honey for a sweet new year are a classic Rosh Hashanah treat. 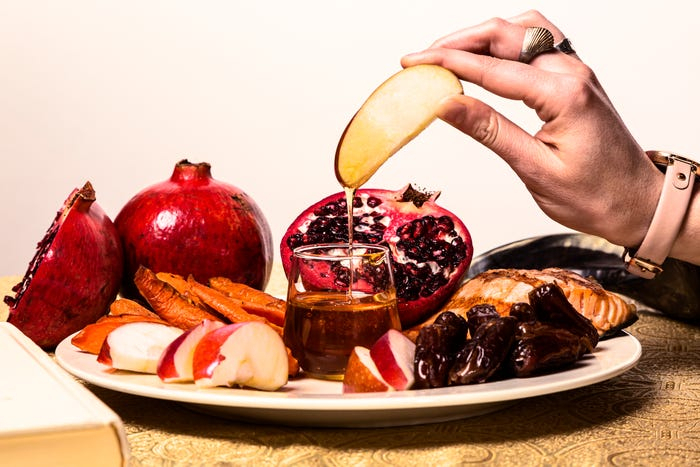 Before eating the honey-dipped apple, a short prayer is recited: "May it be Your will, God, to renew for us a good and sweet year."

Prayer services are read out of a special book called a "machzor." 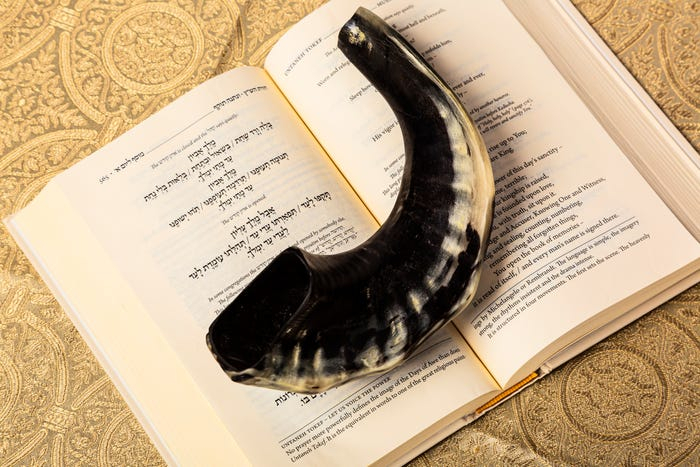 The prayer services include special liturgical poems called "piyutim." The themes of the prayers center around divine judgment, human mortality, and redemption from exile.

The sounds of the shofar, a trumpet-like instrument fashioned from a ram's horn, serve as a "wake-up call" to inspire growth and soul-searching in the year's ahead. 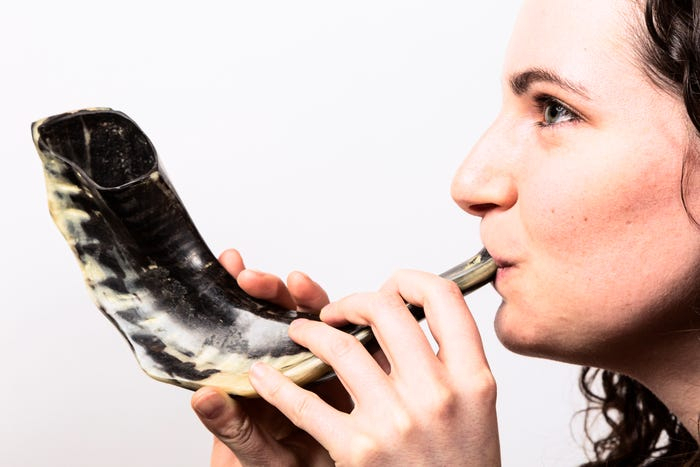 The shofar sounds like a broken, crying voice when blown. In contrast to the complex liturgical poems and prayers, the stark, emotional blast of the shofar encapsulates the emotions of bidding farewell to an old year and welcoming a new one without any words at all. 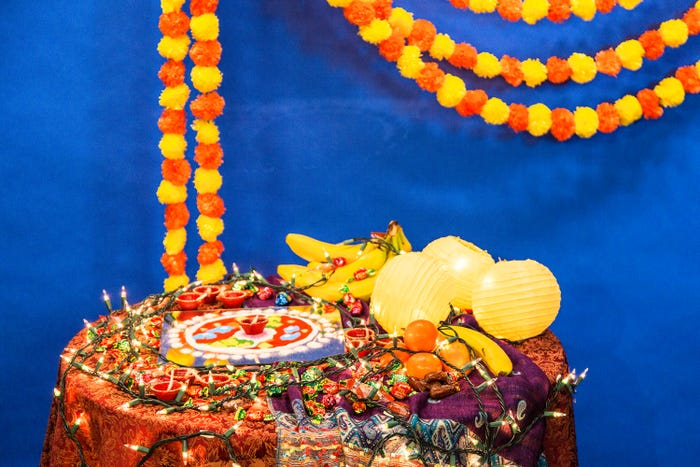 Diwali is about starting anew and the triumph of good over evil remains at the core of the festival. The official holiday is only a couple of days, but there are a lot of celebrations and preparations that lead up to the big event.

The date changes every year based on the Hindu calendar, but typically it falls between mid-October and mid-November. It takes place on the darkest night called "amāsvasya," when the moon is not visible in the sky.

Depending on the region in India, people have different customs and rituals, and various gods they pray to.

Also called the 'festival of lights,' in olden days people would primarily rely on diyas to light up their homes. 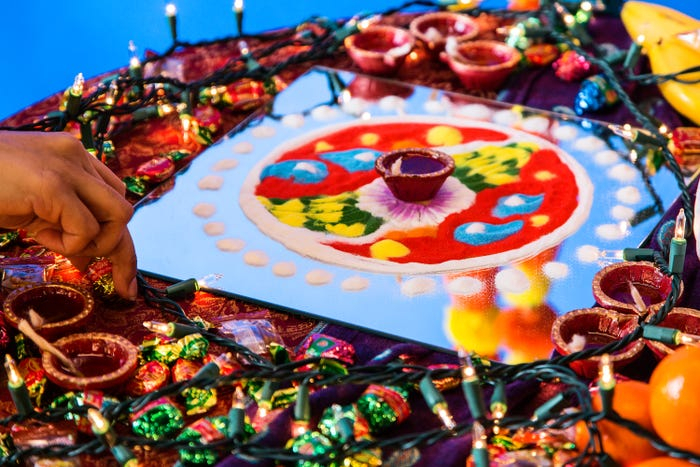 Diyas are small earthen oil-filled lamps placed in every corner of the house, to not let the darkness trickle in. People also light up their homes using string lights, leaving the whole neighborhood brightly lit and shimmering.

On the day of Diwali, people thoroughly clean their homes to welcome the goddess of wealth. Decorating the house and wearing a new dress is vital as well. People make elaborate designs called "rangoli," at their entryways out of colored sand or rice paste. Along with rangoli, flowers, leaves, and rice are added to the mix.

People also use this time to visit their neighbors and relatives' houses to give well wishes and treat each other to sweets.

On Diwali, a time window of a few hours in the evening will open to mark the auspicious time to pray to the goddess of wealth and fortune, Lakshmi. 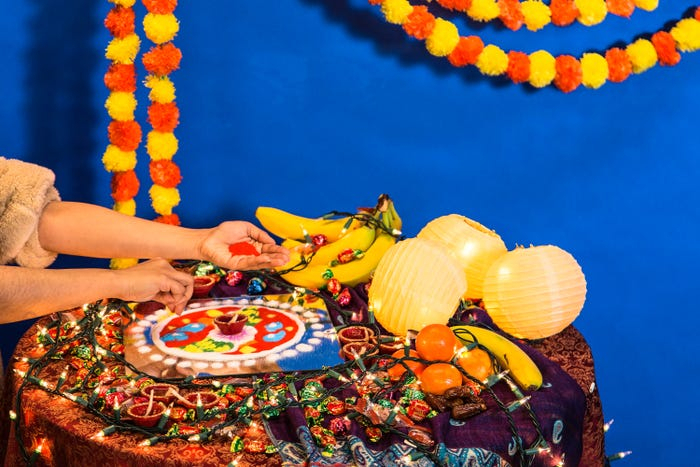 In preparation for this prayer, people arrange a small table with a variety of things like fruits, sweets, coconut, sugarcane, water, ghee, rice, money, and diyas.

After the prayer, one places the diyas around the house and sits down to eat. This meal varies between families, but typically starts and ends with homemade sweets, including laddus, barfi, halwa, chakis, jalebi, and gulab jamun.

People end the celebration with firing firecrackers, which is the highlight of the day for many children. Finally, one goes to sleep hoping Lakshmi sets foot in their house in the middle of the night, blessing them with wealth and goodwill.