New Year's Eve 2020 celebrations and fireworks around the world 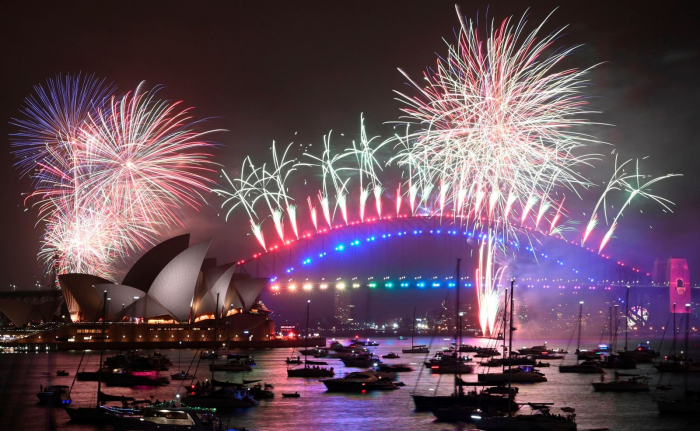 Revelers ring in 2020 with celebrations across the globe.

Russia
Russians began the world's longest continuous New Year's Eve with fireworks and a message from President Vladimir Putin urging them to work together in the coming year.

Putin made the call in a short speech broadcast on television just before the stroke of midnight in each of Russia's 11 time zones. The recorded message was followed by an image of the Kremlin Clock and the sound of its chimes. State TV showed footage of extensive festive fireworks in cities of the Far East. 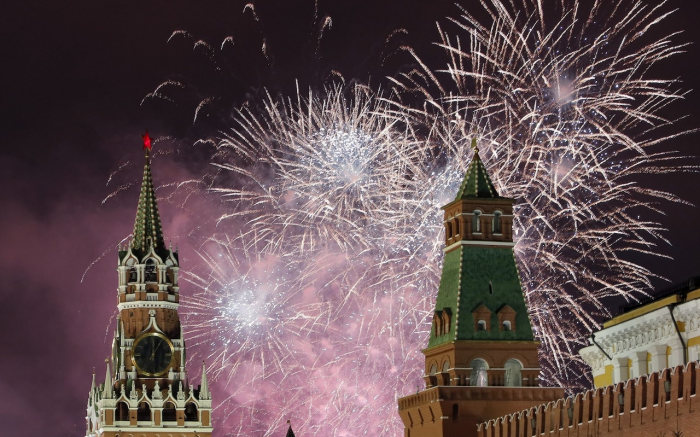 But one holiday tradition was missing in Moscow this year - a picturesque layer of snow. The Russian capital has had an unusually warm December and temperatures in central Moscow as midnight approached were just above freezing. 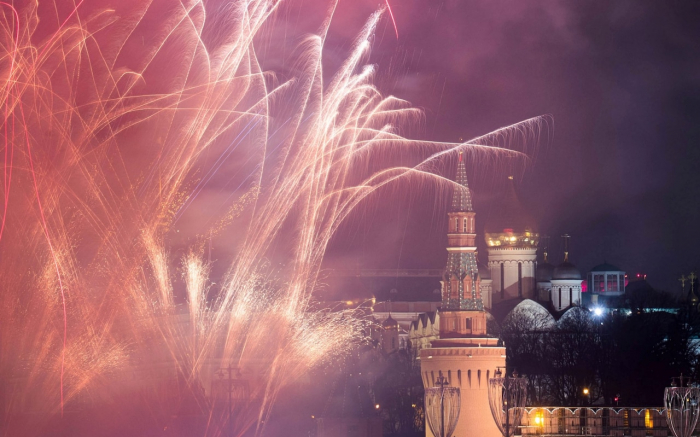 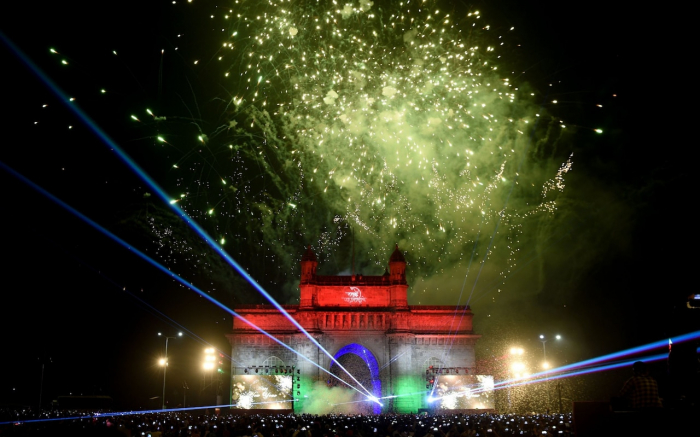 Beijing pledged to to 'seize the day' 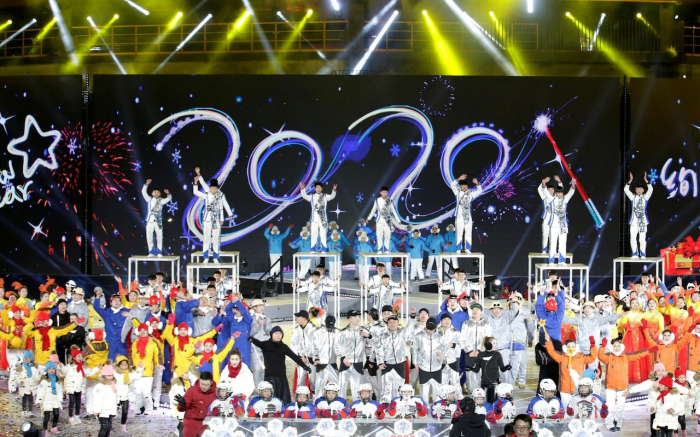 President Xi Jinping delivered a New Year speech in Beijing to ring in 2020, pledging to achieve the first centenary goal of building a moderately prosperous society in all respects in the "milestone" year.

"Let's seize the day and live it to the full," Xi said, as celebrations were well underway including a spectacular party at Shougang Industrial Park, one of the venues for the Beijing 2022 Olympics. 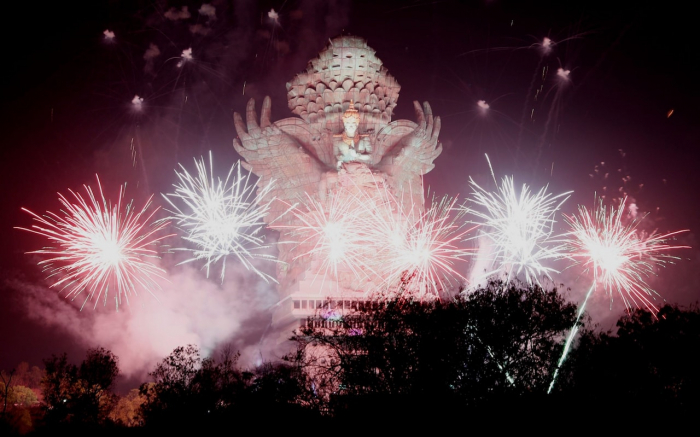 Tens of thousands of revellers in Indonesia's capital of Jakarta were soaked by torrential rains as they waited for New Year's Eve fireworks.

Festive events along coastal areas near the Sunda Strait were dampened by a possible larger eruption of Anak Krakatau, an island volcano that erupted last year just ahead of Christmas Day, triggering a tsunami that killed more than 430 people.

The country's volcanology agency has warned locals and tourists to stay 2 kilometers (1.3 miles) from the volcano's crater following an eruption Tuesday that blasted ash and debris up to 2,000 meters (6,560 feet) into the air.

Kuala Lumpur lights up the night as Singapore sparkles 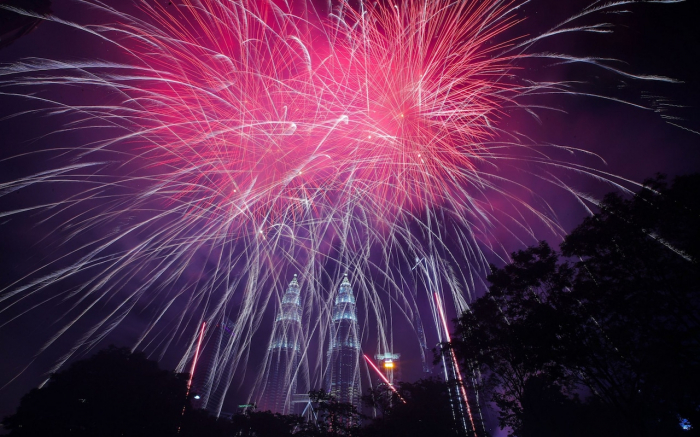 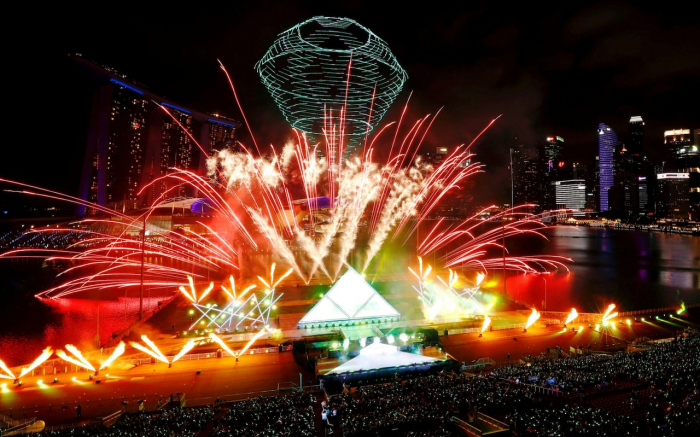 Pro-democracy protesters and revellers flocked to sites across Hong Kong to usher in 2020, but the semi-autonomous Chinese city had toned down its New Year's celebrations amid the months-long demonstrations.

A fireworks display that traditionally lights up Victoria Harbor was cancelled amid safety concerns. Despite this, thousands welcomed 2020 on its neon-lit promenades and many broke into pro-democracy chants shortly after the countdown to midnight.

Instead of fireworks, a "Symphony of Lights" took place, involving projections on the city's tallest skyscrapers, while smaller-scale pyrotechnics were launched from waterfront rooftops. 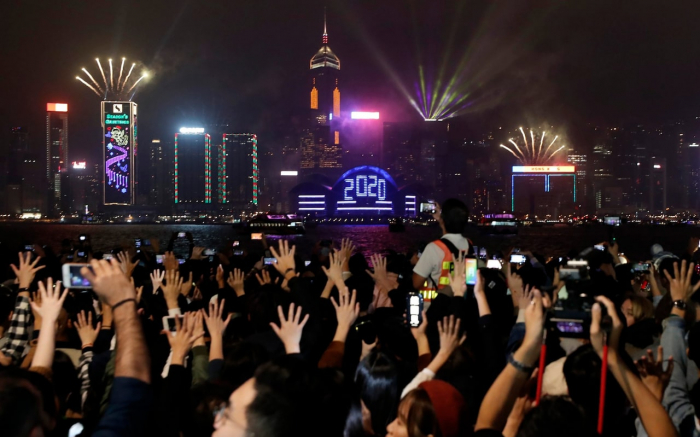 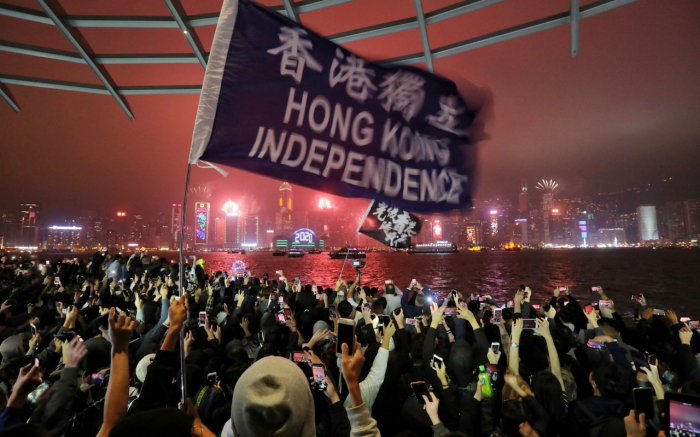 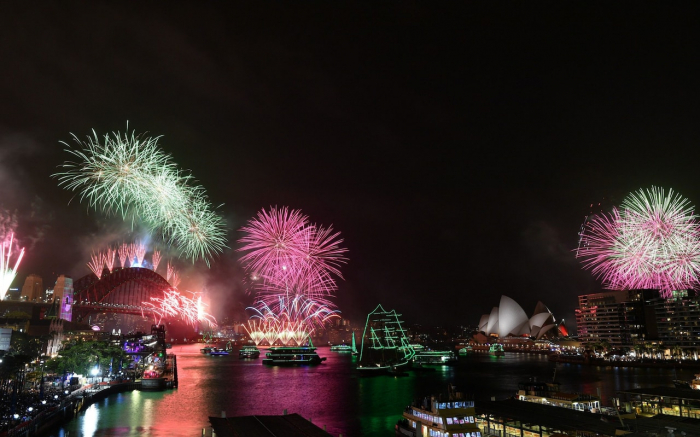 Australia ushered in the New Year with a huge fireworks display in Sydney, despite the calls to cancel the event as devastating bushfires raged across the country.

A petition to cancel the event out of respect for fire victims attracted more than 280,000 signatures. Fireworks displays were scrapped in Australia's capital, Canberra, and Sydney's western suburbs due to elevated fire danger and extreme weather conditions.

Critics had wanted Sydney to use the Aus $6.5 million ($4.5 million) spent on the display to fight bushfires ringing the city, but officials said the event was worth Aus $130 million to the economy and cancelling it would not have helped those impacted by the fires.

More than 100,000 fireworks lit up the skyline for the hundreds of thousands of spectators thronging the city centre.

Crowds were warned to take care as strong winds gusted in the harbour, forcing the cancellation of a boat display that would have blasted water into the sky. 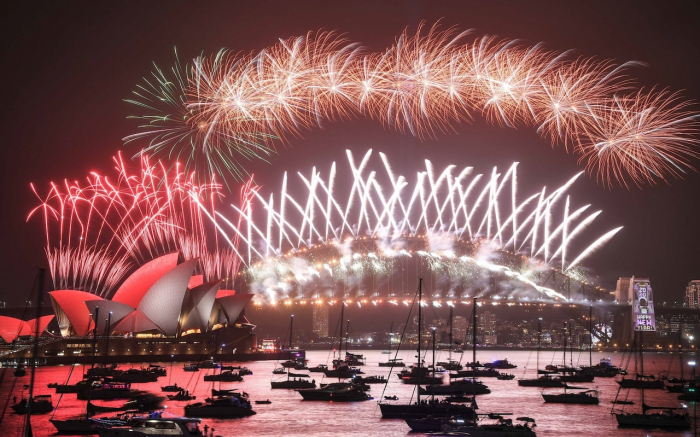 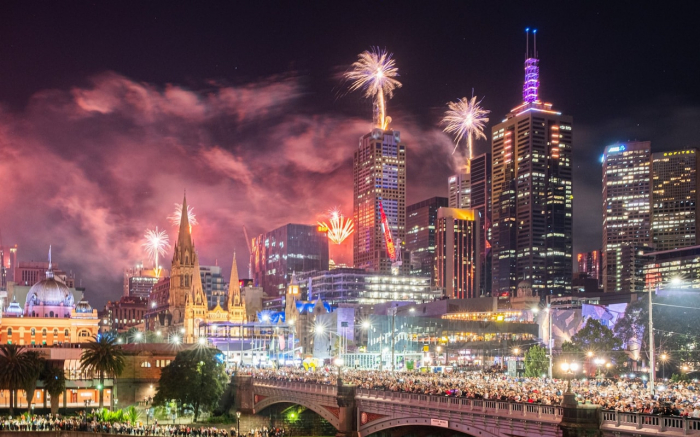 People flocked to temples and shrines in Japan, offering incense with their prayers to celebrate the passing of a year and the first New Year's Eve of the Reiwa era. 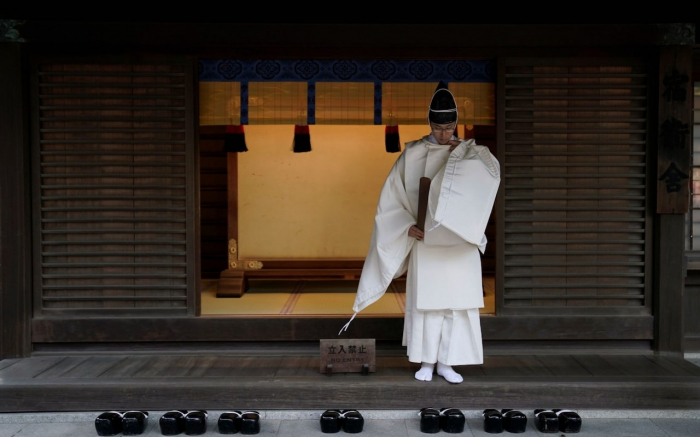 Under Japan's old-style calendar, linked to emperors' rules, Reiwa started in May, after Emperor Akihito stepped down and his son Naruhito became emperor. Although Reiwa is entering its second year with 2020, Jan 1 still marks Reiwa's first New Year's, the most important holiday in Japan.

The first year of the new decade will see Tokyo host the 2020 Olympics, an event that is creating much anticipation for the capital and the entire nation.

Fireworks are set off from the Sky Tower in Auckland, New Zealand, during New Year's Eve celebrations on January 1. 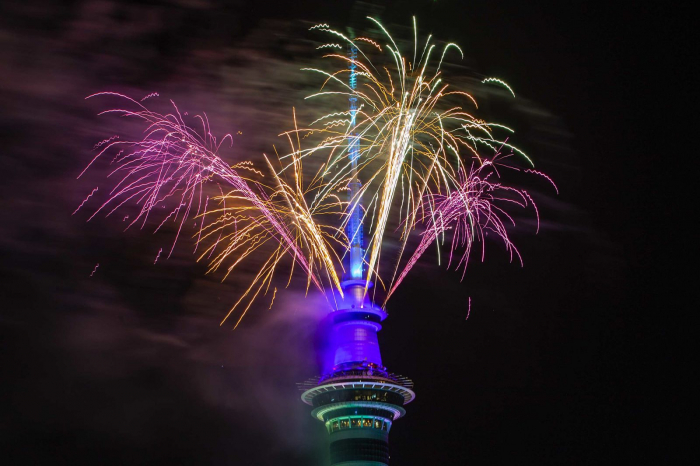 As the most populated city in New Zealand, Auckland always puts on a good show and the Sky Tower display was spectacular as half a ton of fireworks burst from the landmark towering over the city centre.

South Korea and Samoa have started the party

Thousands of South Koreans filled the downtown streets in Seoul ahead of a traditional bell-tolling ceremony near City Hall. Dignitaries picked to ring the old Bosingak bell at midnight included South Korean Major League Baseball pitcher Hyun-Jin Ryu and Pengsoo, a giant penguin character with a gruff voice and blunt personality that emerged as one of the country's biggest TV stars in 2019. 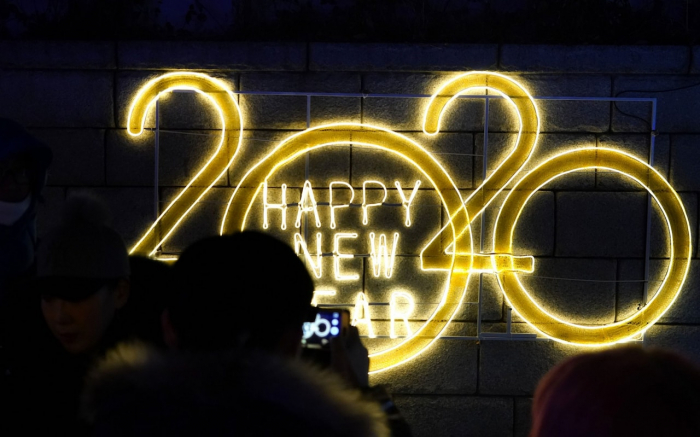 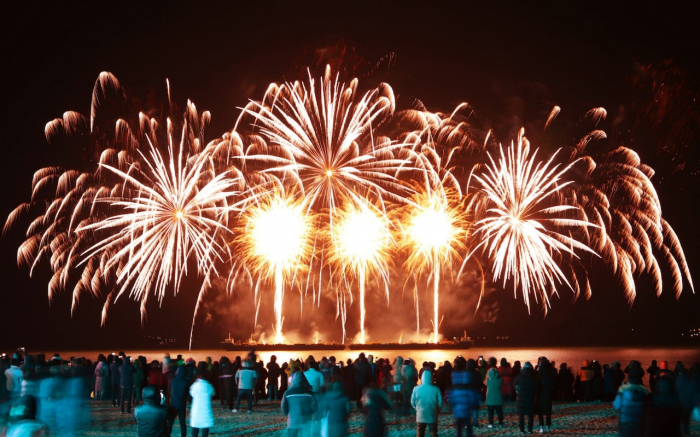 In Samoa, fireworks  erupted at midnight from Mount Vaea, overlooking the capital, Apia. The Pacific island nation of Kiribati was also one of the first countries to welcome the new decade. The nation's 3,200 coral atolls are strewn more than 3 million square miles, straddling the equator.

Thousands gathered around the tower, where - for the first time - lasers and animations accompanied the fireworks display.