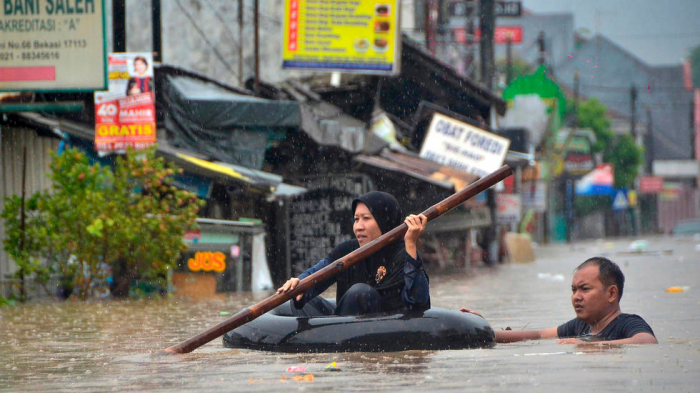 Flash floods inundated swathes of Indonesia’s capital and nearby towns on the first day of the New Year after torrential rainfall overnight, killing at least nine people and forcing thousands of people to evacuate, authorities said on Wednesday, AzVision.az reports citing Reuters.

“As of 4 pm today, there are 19,079 displaced residents who have been evacuated at temporary shelters throughout Jakarta,” city governor Anies Baswedan told a news conference.

“The rain in Jakarta has stopped, now we are waiting for the water to recede”.

Indonesia’s disaster mitigation agency (BNPB) said at least 9 people had died in flash floods and landslides triggered by the rain in Jakarta and nearby towns.

Most of the deaths were due to hypothermia, though one was a teenager who was electrocuted by a power line, disaster mitigation agency spokesman Agus Wibobo said.

Water levels in East and South Jakarta as well as in the satellite cities of Tangerang and Bekasi in West Java province started to quickly rise from 3 a.m. local time (2000 GMT), according to the disaster mitigation agency.

Indonesia’s state electricity utility said it had switched off the electricity in hundreds of districts in Jakarta, which is home to 30 million people.

The floods also caused the temporary closure of the runway at Jakarta’s domestic Halim airport, with flights redirected to the capital’ bigger Soekarno airport.

City authorities have in the last few years sought to improve low-lying Jakarta’s vulnerability to flooding during the rainy season.

More than 50 people died in one of the capital’s deadliest floods in 2007 and five years ago much of the center of the city was inundated after canals overflowed.

Jakarta resident Daniel, whose neighborhood had been waterlogged, told reporters of his disappointment with the city government’s efforts to mitigate the floods, which happen yearly during the rainy season.

“I only have one hope, which is to ask the current governor to fix this because it impact all the people,” he pleaded.

“Take the right action please, look at what is happening now, bring the situation back to normal.”

Electricity was switched off in hundreds of waterlogged neighbourhoods across Jakarta, home to about 30 million, with some train lines and one of the city's airports also shut.

"We're hoping that the floodwaters will recede, but if the rain keeps up it'll continue," said the official, who like many Indonesians goes by one name.

Among the victims was an elderly couple trapped inside their home in a district where floodwaters reached as high as four metres (13 feet) after a river burst its banks.

Local media reports said three more people were killed after the Tuesday evening downpour triggered landslides in Cinere on the southern edge of the city.

Those deaths could not be immediately confirmed, and police said they were still investigating.

"We have shut down power (in many areas) to avoid more electrical shocks," Ikhsan Asaad, an official at state firm PLN, told AFP.

Asaad said he could not estimate how many residents had been affected by the power shutdown.

Images from across the region showed waterlogged homes and cars submerged in muddy floodwaters, while some people took to paddling in small rubber lifeboats or tyre inner-tubes to get around.

Flights were cancelled at Halim Perdanakusuma airport, which handles commercial and military planes, due to severe flooding on its runways, according to the transport ministry.

Many flights were transferred to Jakarta's main Soekarno–Hatta International Airport.

Jakarta is regularly hit by flooding during Indonesia's rainy season, which started in late November.