Australian wildfires may have killed half a billion animals and plants 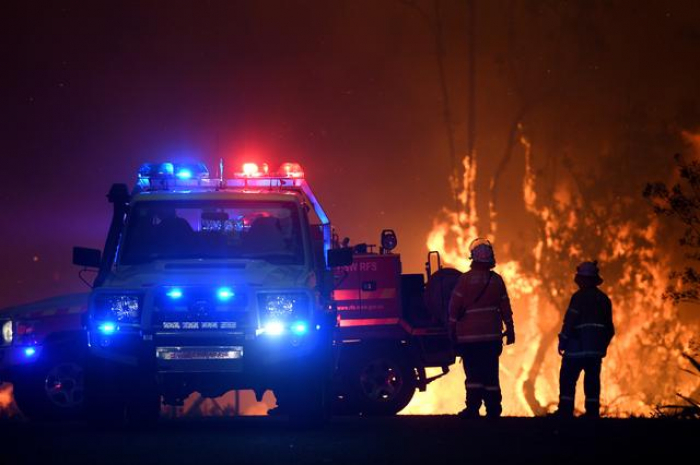 As apocalyptic wildfires continue to rage across Australia, the loss of life in the region is reaching staggering numbers. Ecologists at the University of Sydney now estimate that nearly half a billion animals and plants have been wiped out since the fires began several months ago, CBS news reports.

The "mega blaze" has destroyed homes and sent thousands of people fleeing to the shoreline from New South Wales and Victoria. About 12.35 million acres of land have burned nationwide over the past few months. At least 17 people have been killed, The Associated Press reports.

Approximately 480 million mammals, birds and reptiles have been lost since the fires intensified in September, the university said in a statement, but the actual number is likely to be substantially higher. Devastating images and videos from the area show kangaroos trying to flee burning forests and charred bodies of koalas lying on the ground.

Koalas, which were already under threat due to significant habitat loss, have been hit particularly hard. Ecologists said nearly 8,000 koalas —about one-third of the population in their primary habitat — are believed to have died since the fires began.

"Up to 30% of their habitat has been destroyed," Australia's environment minister, Sussan Ley, told the Australian Broadcasting Corporation. "We'll know more when the fires are calmed down and a proper assessment can be made."

While animal hospitals are taking in as many animals as possible to treat burns and nurse them back to health, services have overall struggled to keep up with the amount of care needed. And the animals that have survived will have trouble finding food and shelter among the ongoing flames.

"We're getting a lot of lessons out of this and it's just showing how unprepared we are," Science for Wildlife executive director Dr. Kellie Leigh told parliament during an urgent December hearing regarding the koala population, News Corp Australia reports. "There's no procedures or protocols in place — even wildlife carers don't have protocols for when they can go in after fire."

"The fires have burned so hot and so fast that there has been significant mortality of animals in the trees, but there is such a big area now that is still on fire and still burning that we will probably never find the bodies," Nature Conservation Council ecologist Mark Graham said during the hearing.

Koalas "really have no capacity to move fast enough to get away" from the flames, he said.

Associate Professor Dieter Hochuli from the University of Sydney said it isn't just the well-known species, such as kangaroos and koalas, that are at risk. Insects that are key to services like pollination and nutrient cycling also suffered massive losses, and it is not clear how those populations and ecosystems will recover. Additionally, many rare plant species are feared to have disappeared completely.

"Fire is a natural part of Australian ecosystems and many of our plants and animals are adapted to it," Hochuli said. "However, changes to the frequency and intensity of fires can have a massive impact on wildlife. We know that risk of extinction increases exponentially as populations decline to low numbers so this raises significant concerns for their future."

Wildlife Information, Rescue and Education Services told Reuters that services typically advise against feeding wild animals. However, the inferno has prompted them to change their advice. They're now encouraging people to provide wildlife with much-needed food and water.

Australia on Wednesday deployed military ships and aircraft to help stranded communities, bringing water, food and fuel to towns with depleted supplies and roads that were cut off by the fires.

Australia's wildfire season may already be the worst on record, with record-breaking heatwaves and intense smoke, which doctors have deemed a "public health emergency." Many residents are protesting conservative Prime Minister Scott Morrison's lack of sufficient action against climate change after he reportedly rejected calls last month to downsize Australia's lucrative coal industry.

"The compelling issue here is climate change," said Sydney Mayor Clover Moore. "Yes, Australia is burning and national parks and our native animals are being decimated and our communities are being devastated. People have lost homes. People have died. Firefighters have been killed defending communities, most recently last night."

"As the driest continent on Earth, we're at the forefront of accelerating global warming," she continued. "What is happening is a wake-up call for our governments to start making effective contributions to reducing global emissions... It's our national governments that are failing us."