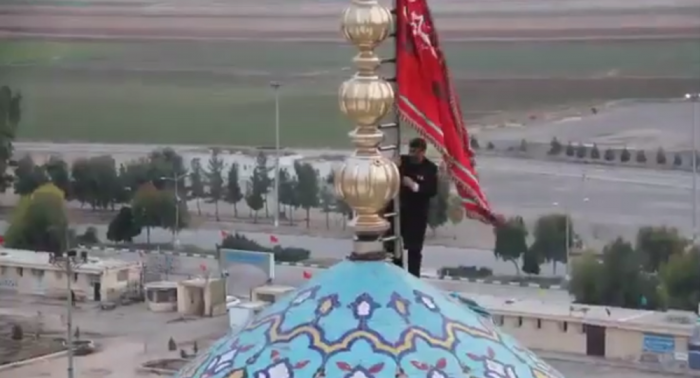 Already difficult relations between Iran and the United States deteriorated further on Friday after the US assassinated Revolutionary Guard Corps Quds Force Commander Qasem Soleimani in a Baghdad drone strike.

Iran’s Fars News broadcaster has released footage showing the unfurling of a blood red flag over the dome of Jamkaran Mosque in Qom, central Iran, one of the most significant mosques in Iran and one of the holiest sites in Shia Islam.

The footage shows the flag being carried up the steps of the mosque, with a portrait of slain Quds Force commander Qasem Soleimani placed on top of the banner in a solemn procession. The flag is then seen being raised over the mosque’s dome.

In Shiite tradition, the red flag symbolizes the unjust spilling of blood and a call to avenge the victim or victims. Its use goes back to the period of Imam Husayn ibd Ali, grandson of the Prophet Muhammad, who was beheaded at the Battle of Karbala in 680 AD along with dozens of his followers. The flag signifies the intent of Shia Muslims to avenge their slain leader.

According to observers, the flag had never been hoisted over the holy site before. It was taken to mean that the conflict between Iran and the US over commander Soleimani’s assassination would escalate further.

‘There Will Be Dead Americans’

Tensions between Iran and the US following the Quds force commander’s killing have sparked fears that Iran’s ‘response’ may include the targeting of Americans in the Middle East and elsewhere.

On Friday, former acting CIA director Michael Morell told CBC that Soleimani’s assassination, while understandable, would come “at a very high cost” to the United States. “Number one, there will be dead Americans, dead civilian Americans, as a result of this. Possibly over the next few days in any place where Iran has its proxies, Iraq is the most likely place, but also Lebanon, Bahrain, other places in the Middle East,” Morell warned.

According to the ex-spy, Iran could also bide their time and carry out a strike on a senior American official in a tit-for-tat response at some moment in the future. “And that could be anywhere in the world,” he said, even on American soil.

On Saturday, Maj. Gen. Esmail Ghaani, Soleimani’s successor as head of the Quds Force, issued a warning urging supports to “be patient,” adding that “you will see the bodies of Americans all over the Middle East.”

Also Saturday, Revolutionary Guard Corps Commander Gholamali Abuhamzeh said that some thirty five US targets in the Middle East as well as Israel were “within [Iran’s] reach” for possible retaliation to the killing of Soleimani.

An estimated 5,000 US troops are presently stationed in Iraq, with thousands more deployed at US bases and so-called lily pad facilities across Arabia, Afghanistan, Pakistan, Turkey, Syria, and other countries near Iran’s borders.

Soleimani, commander of the Revolutionary Guards’ Quds Force, responsible for Iran’s foreign military operations, and a senior Iraqi Shia militia commander were killed early Friday morning when the vehicle they were traveling in near the Baghdad International Airport was destroyed in a US drone strike. US President Donald Trump justified the attack later Friday, accusing Soleimani of “plotting imminent and sinister” attacks against Americans. The State Department accused the commander of planning the December 27 artillery attack on a US base in Kirkuk, Iraq, which led to the death of one US civilian contractor. No group has claimed responsibility for that attack. The US had already reacted to that attack by targeting five Shia militia bases across Iraq and Syria, killing at least 25 fighters and injuring dozens more. The attacks led to an attempt to storm the US Embassy in Baghdad by angry protesters, and to calls by some Iraqi politicians and militia leaders to demand a US withdrawal from Iraq.