Iran considering ‘13 scenarios for revenge’ for killing of top general 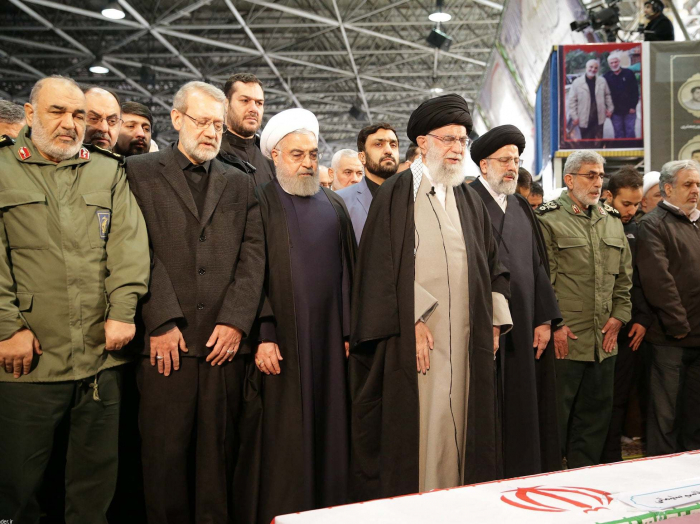 Iran is considering “13 scenarios for revenge” against the US for the killing of top general Qassem Soleimani in a drone strike last week, according to the country’s top security official.

Ali Shamkhani, secretary of the Supreme National Security Council, said “the mission to avenge our slain brother will not be limited to a single operation,” according to the hardline Fars news agency.

"Up until now, 13 scenarios for revenge have been proposed," he said. "Even if there is a consensus on the weakest scenario, executing it can turn into a historic nightmare for the Americans."

The leader of Iran's Revolutionary Guard threatened on Tuesday to "set ablaze" places supported by the United States in a speech to a crowd of thousands in Soleimani’s hometown of Kerman.

"We will take revenge. We will set ablaze where they like," Hossein Salami told the crowd, drawing the cries of "Death to Israel!"

Soleimani, the leader of Iran’s Quds Force, was killed in a drone strike on 3 January in Baghdad airport. The strike was ordered by Donald Trump following weeks of rising tensions between US military forces and Iran-backed militias in Iraq.

In his dual role as diplomat and military commander, Soleimani, 62, was the architect of Iran’s military influence across the Middle East. He travelled the region to build and support a network of allied militias that aimed to project Iran’s strength and counter US influence.

The proxy groups he built and supported killed hundreds of US troops during the Iraq War, and Washington has claimed – without providing evidence – that he was planning new attacks against the US.

The killing has dramatically raised tensions in the Middle East and provoked a flood of criticism for the Trump administration at home and abroad.

Speaker Nancy Pelosi said Sunday that the house will vote on a war powers resolution this week to limit President Donald Trump‘s military actions against Iran, warning that his order last week for a lethal strike against a top Iranian commander risked a serious escalation of tensions in the Middle East.

In a letter to Democrats, Ms Pelosi said the US action that killed Soleimani​ was a “provocative and disproportionate military air strike targeting high-level Iranian military officials” that endangered members of the US military, diplomats and others.