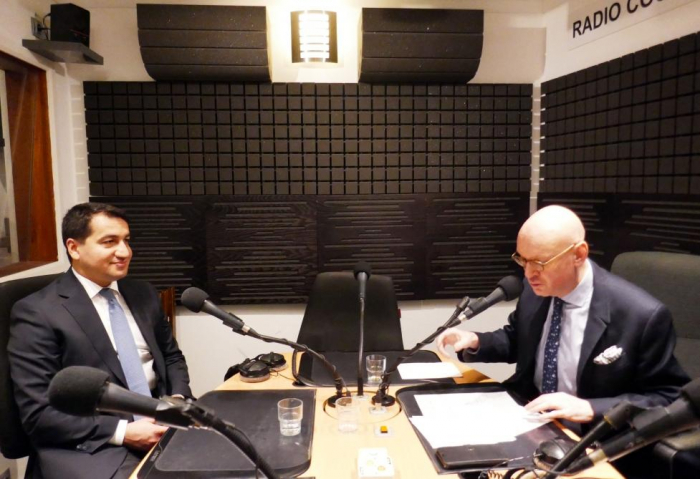 Assistant to the President, Head of the Department for Foreign Policy Affairs of Azerbaijan’s Presidential Administration Hikmet Hajiyev gave an interview to French Radio Courtoisie, Trend reported on Jan. 9.

Hajiyev spoke about comprehensive reforms under the leadership of Azerbaijani President Ilham Aliyev, the work carried out in the direction of economic development, and further improvement of the judicial system and public administration.

The head of the department also told about the historical roots of the Armenia-Azerbaijan Nagorno-Karabakh conflict, the process of negotiations between the two countries, Armenia’s destructive position and the fact that Armenia undermines the negotiation process by making contradictory statements.

Hajiyev emphasized Azerbaijan’s fair position and stressed that the country intends to resolve the conflict peacefully.

The head of the department said that it is necessary to call a spade a spade.

“The fact of the occupation is obvious,” Hajiyev said. “More than a million Azerbaijanis have been expelled from their houses and live as refugees and internally displaced persons. These people have the right to live on their lands and use their property.”

“The co-chairs of the OSCE Minsk Group and the world community must strengthen their political and diplomatic influence and demand Armenia to withdraw its troops from the occupied Azerbaijani territories,” the head of the department said. “The historical borders of the countries cannot be changed by force in the 21st century.”

The head of the department also touched upon Azerbaijan’s foreign policy.

While talking about the country's bilateral relations with France, Hajiyev emphasized Azerbaijani First Vice President Mehriban Aliyeva’s key role in, and invaluable contribution to, the development of these relations.

Hajiyev stressed that there is great potential for strengthening the cooperation.

The head of the department also noted Azerbaijan’s role in ensuring Europe’s energy security and gave information about TANAP and TAP projects.

During the live interview, Hajiyev answered the audience’s questions.