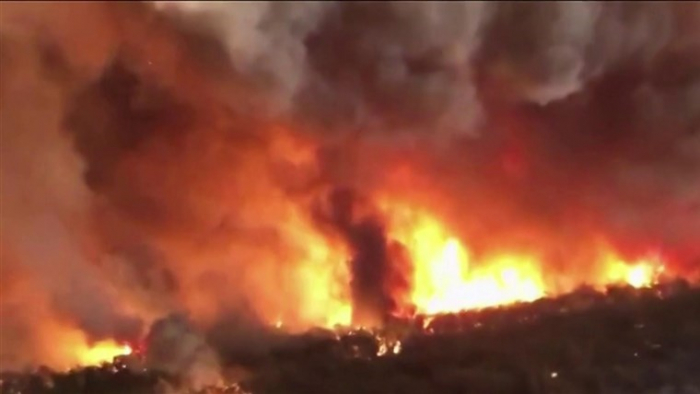 Australia urged nearly a quarter of a million people to evacuate their homes on Friday and prepared military backup as authorities said the next few hours could be “very, very challenging” even as rain poured down in some parts, AzVision.az reports citing Reuters.

“Even with rain in Melbourne, even with forecast better conditions next week, there is a long way to go in what has been an unprecedented fire event...and, of course, we know that we have many weeks of the fire season to run,” Daniel Andrews, the premier of Victoria, told a televised briefing.

“The next few hours are going to be very, very challenging.”

While the winds are expected to move through by Saturday morning, Andrews urged residents to stay on high alert and leave the community “if you are told to”.

Authorities sent emergency texts to 240,000 people in Victoria, telling them to leave. People in high-risk regions in New South Wales and South Australia were also urged to think about leaving, but officials did not say how many.

* Of nine fires in the state of South Australia, one was categorized as an emergency.

* Climate protests were also planned on Friday in cities such as Canberra, targeting the government’s handling of the crisis and its position on climate change.

* Prime Minister Morrison said he was considering holding a wide-ranging national inquiry into the bushfires after the immediate crisis passed.

* Just shy of 2,000 homes have been destroyed in New South Wales, state authorities said, half during the past 10 days.

* The Commonwealth Bank of Australia is to donate cricketer Shane Warne’s prized “baggy green” cap to a museum after paying more than A$1 million for it at an auction for bushfire relief.

* Authorities have warned that the huge fires, spurred by high temperatures, wind and a three-year drought, will persist until there is substantial rainfall. The weather agency said there was no sign of that for months.

* Ecologists at the University of Sydney have estimated 1 billion animals have been killed or injured in the bushfires, potentially destroying ecosystems.

* About 100 firefighters from the United States and Canada are helping, with another 140 expected in coming weeks.

* Smoke has drifted across the Pacific, affecting cities in South America, and may have reached the Antarctic, the U.N.’s World Meteorological Organization said.

Since October, 27 people have been killed and thousands subjected to repeat evacuations as huge and unpredictable fires scorched more than 10.3 million hectares (25.5 million acres) of land, an area roughly the size of South Korea.

In the coastal town of Eden in New South Wales, where the alert status was upgraded to ‘watch and act’ on Friday evening, smoke filled the horizon as winds blew smoke and ash.

Shereen and Kim Green, who live on a farm with three houses and 50 cattle just outside Eden, were racing to fill two 1,000-litre tanks of water.

“This is to put out the spot fires and we’ll be staying up all night to defend our property,” said Shereen, as the wind shook her utility vehicle. “We’re taking the opportunity while we can.”

Sitting under the town’s watchtower, another resident Robyn Malcolm said: “If it all goes wrong, we’ll dash down to the wharf and get on a tugboat.”

Here are key events in the crisis:

* Of 160 fires ablaze across New South Wales (NSW), about 46 were uncontained. Two were burning at an ‘emergency level’, eight blazes were in the “watch and act” category, with the rest at the “advice” level, the lowest alert rating.

* Neighboring Victoria had 36 fires, with more than 1.3 million hectares burned. Nine fires were at an emergency level.

* In the alpine region on the border of the southeastern states of Victoria and New South Wales, two fires were poised to merge and create a blaze over almost 600,000 hectares (1.5 million acres).

* Victoria emergency services minister Lisa Neville said some communities had been provided with large containers of satellite phones, baby formula, food, nappies, and torches in case they are cut off.

* Campaigners protested in Sydney and Melbourne on Friday as part of a wave of demonstrations planned in major world cities, to spotlight concerns about Australia’s climate change policies.

* Westpac estimated total bushfire losses to date at about A$5 billion ($3.4 billion), higher than the 2009 bushfires in Victoria but smaller than the Queensland floods in 2010/11. It forecast a hit of 0.2% to 0.5% on gross domestic product.

* The Insurance Council of Australia increased its estimate of damages claims from the fires to more than A$900 million, with claims expected to jump further.

* Australia’s wildfires have dwarfed other catastrophic blazes, with its burned terrain more than twice the extent of that ravaged this year by fires in Brazil, California and Indonesia combined.