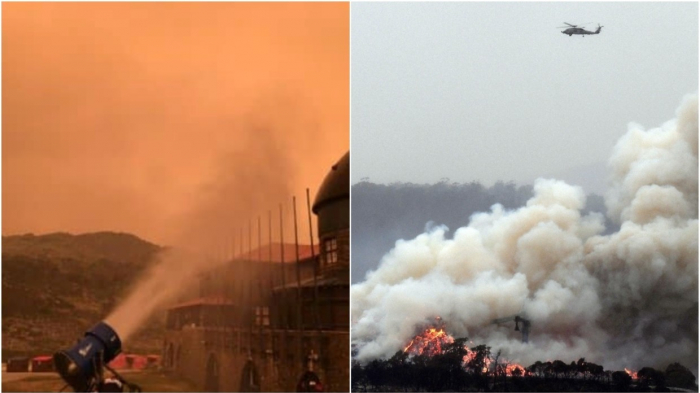 Heat and erratic winds were forecast on Friday for the area, located about 200 kilometers (124 miles) inland from the coastal fires ravaging the country’s southeast and officials warned of “extreme” danger.

Images from live cameras at Perisher, the largest ski resort in the southern hemisphere, showed “snow guns” connected to long twisting hoses funneling liters of water instead of white powder.

“We have been preparing the resort ahead of worse fire conditions,” the resort said in an emailed statement to Reuters. “We are utilizing resort infrastructure including snowmaking to support fire authorities.”

The tactic was also being deployed at the Thredbo Ski Resort, southeast of Australia’s highest peak, Mt Kosciuszko.

“They have turned all the snowmakers on, so that’s stopped the ember attacks,” Stephen Turner, owner of the Aneeki Ski Lodge in Thredbo, told Reuters by phone.

Locals are worried about suffering the same fate as the Selwyn Snow Resort, some 50 kilometers (31 miles) north of Thredbo in the Kosciuszko National Park, which was razed by fires a week ago. The blazes destroyed the resort buildings and damaged snow equipment.

The usually temperate Snowy Mountains region is a popular tourist spot even in summer, particularly with hikers, mountain bikers and other nature lovers.

An estimated 479,000 people usually visit during the snow-free period. This season’s summer tourists fled as authorities closed the national park a week ago because of the fire threat.

Residents who remained used a reprieve from searing temperatures this week to strengthen containment lines around their homes and businesses.

“We’ve got water tanks on the hill, so we’re going to put in sprinklers to where we pull all the vegetation around the building - we then are going to put the sprinkler system to keep the ground wet,” Mark Glover, part-owner of the Thredbo Farm Ski Lodge and a volunteer firefighter, told Reuters.

HERITAGE HUTS
Temperatures were forecast to top 30 degrees Celsius (86°F) on Friday in parts of the region, where much of the bushland is very dry after a three-year drought.

High in the mountains, state park staff earlier this week wrapped some of the regions 200 heritage-listed wooden alpine huts - some built more than 100 years ago by stockmen, miners and skiers - in fire retardant foil.

“Our only hardware store ran out of anything remotely associated with fire fighting,” Cameron Barton, who owns a sports apparel store in Jindabyne and lives at a property outside of town, told Reuters by phone. “We ran out of hoses, fittings, pumps, absolutely everything was gone and people have been scrambling.”

Snowy Monaro Regional Council Mayor Peter Beer said locals had done as much as they could and the fate of the alpine towns was now in the hands of nature.

“They’ll be able to spread the ground with snow guns that they’ve got,” he said. “We don’t know how effective that will be though.”