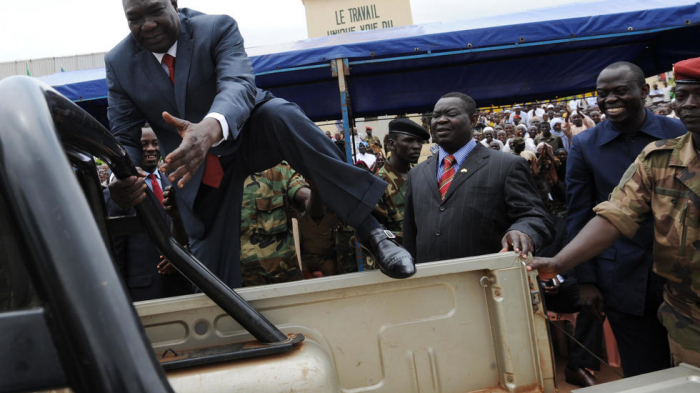 Djotodia, 71, who resigned 10 months after seizing the presidency at the head of a Muslim rebellion in March 2013, landed on board a Royal Air Maroc flight from Casablanca via Douala in Cameroon. He had been living in exile in Benin.

He was welcomed at a hotel in the capital by about 30 of his supporters and given a security escort by police and army personnel, an AFP reporter saw.

He was expected to meet later with President Faustin-Archange Touadera.

"I urge all the rebels to be patient," Djotodia said separately in a brief interview with AFP.

"There is a peace agreement which has been signed. It is time for all of us, fighters and all Central Africans, to stand up to pacify the country."

Djotodia's rebel movement, known as the Seleka, plunged the CAR into violence in 2013.

Sectarian fighting between the pro-Christian and Muslim militia sparked military intervention by France, the former colonial power, to stem the bloodshed.

Djotodia quit as president under international pressure on January 10 2013.

His successor, Touadera, was elected in 2016.

He governs with the support of MINUSCA, a 14,700-person UN peacekeeping force. But most of the country lies in the hands of armed groups, who often fight over the country's mineral resources.

The long conflict has forced nearly a quarter of the country's 4.7 million people to flee their homes.

The United Nations estimates that two thirds of the population depends on humanitarian aid to survive.

The country is ranked next-to-last after Niger on the 2018 UNDP's Human Development Index, which compares longevity, education, and income per capita. Life expectancy is just 52.9 years.

There have been repeated peace agreements between the government and armed groups. The most recent, signed on February 6 last year, has lessened the intensity of the violence but not ended it.

Bozize returned home on December 16 to be hailed by thousands of supporters.

He arrived just in time to register as a candidate for the next presidential election due in 2020, but he has not disclosed his intentions.

He is named in an international arrest warrant, filed by the CAR in 2013, for "crimes against humanity and incitement to genocide."