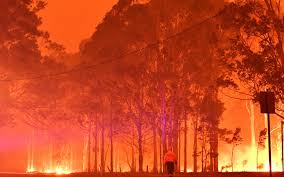 Bushfire conditions eased in Australia on Saturday after a grueling night for firefighters, with authorities saying they expect at least a week of milder weather in which to step up defenses against the huge blazes still burning, AzVision.az reports citing Reuters.

Cooler temperatures and rainfall had eased conditions after Friday’s strong southerly wind change that packed gusts of more than 100 kph (60 mph), whipping some fires on the east coast up to the emergency warning level.

The much needed respite was an opportunity to consolidate and try and get the upper hand over the fires, said Shane Fitzsimmons, commissioner of the New South Wales (NSW) Rural Fire Service.

“It would appear that we have got at least a week,” Fitzsimmons told a media briefing. “It will probably be the best seven days we have had without a rise of very dangerous fire ratings.”

New South Wales police said in a statement that areas not affected by the bushfires of the South Coast, a popular holiday destination, are in a position to reopen for business, although national parks remain close until Feb. 1.

Officials have been urging foreign tourists to continue visiting Australia, which depends on income from tourism as the industry accounts for 3.1% of the country’s gross domestic product.

South Australian fire officials said the situation on Kangaroo Island has stabilized after more than 200,000 hectares (494,000 acres) had burnt in blazes described as “hell on earth”, by the island’s mayor, Michael Pengill, on Twitter.

Since October, 27 people have been killed in Australia and thousands subjected to repeat evacuations as huge and unpredictable fires scorched more than 10.3 million hectares (25.5 million acres), an area roughly the size of South Korea.

The Sydney Opera House was expected to illuminate its sails on Saturday evening with a display of images from the last three months of the fire crisis, honoring those affected and those fighting the flames.

Despite Saturday’s respite, authorities were clear, however, that the risk was far from over.

“It is great to have some respite now, so we can reset and refocus in terms of our operational activities and what we can do to support community, but we will have more hot weather,” Andrew Crisp, Victoria’s emergency management commissioner, told reporters.