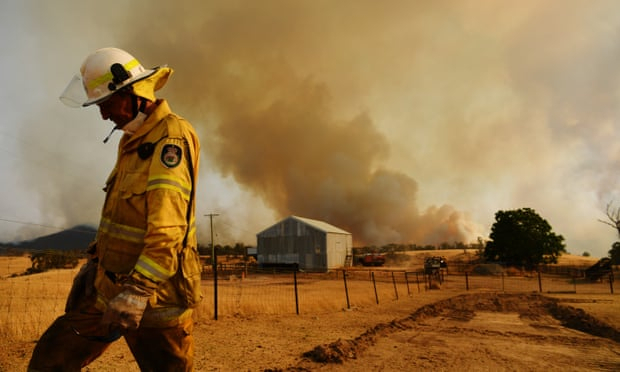 A year of extreme weather events and mounting evidence of global heating have catapulted the climate emergency to the top of the list of issues worrying the world’s elite, the Guardian reported.

The World Economic Forum’s annual risks report found that, for the first time in its 15-year history, the environment filled the top five places in the list of concerns likely to have a major impact over the next decade.

Børge Brende, President of the World Economic Forum, said: “The political landscape is polarised, sea levels are rising and climate fires are burning. This is the year when world leaders must work with all sectors of society to repair and reinvigorate our systems of cooperation, not just for short-term benefit but for tackling our deep-rooted risks.”

After a month that has seen bush fires raging out of control in Australia, Brende said there was a need for urgent action.

“We have only a very small window and if we don’t use that window in the next 10 years we will be moving around the deckchairs on the Titanic.”

The WEF report said the retreat from the multilateral approach that helped cope with the 2008 financial crisis made it more difficult to tackle shared global risks.

It said the top five risks in terms of likelihood in the next 10 years were:

- Extreme weather events with major damage to property, infrastructure and loss of human life
- Failure of climate-change mitigation and adaptation by governments and businesses
- Human-made environmental damage and disasters, including environmental crime, such as oil spills and radioactive contamination
- Major biodiversity loss and ecosystem collapse with irreversible consequences for the environment, resulting in severely depleted resources for humankind as well as industries
- Major natural disasters such as earthquakes, tsunamis, volcanic eruptions, and geomagnetic storms

The report was released ahead of the WEF’s annual meeting in Davos next week, which will be attended by the chief executives of some of the world’s biggest and powerful companies. Despite the large number of participants flying in to Switzerland by private jet, the WEF said Davos would be a carbon neutral event.

But John Drzik, chairman of Marsh & McLennan insights, which helped to compile the report, said businesses had to step up their action on global heating.

“There is mounting pressure on companies from investors, regulators, customers, and employees to demonstrate their resilience to rising climate volatility. Scientific advances mean that climate risks can now be modelled with greater accuracy and incorporated into risk management and business plans. High profile events, like recent wildfires in Australia and California, are adding pressure on companies to take action on climate risk at a time when they also face greater geopolitical and cyber risk challenges.”

Peter Giger, group chief risk officer of Zurich Insurance Group, which also collaborates in the preparation of the risks report, said there was a pressing need to adapt faster to avoid the worst and irreversible impacts of the climate crisis and to do more to protect the planet’s biodiversity.

“Biologically diverse ecosystems capture vast amounts of carbon and provide massive economic benefits that are estimated at $33tn (£25tn) per year – the equivalent to the GDP of the US and China combined. It’s critical that companies and policymakers move faster to transition to a low carbon economy and more sustainable business models.

“We are already seeing companies destroyed by failing to align their strategies to shifts in policy and customer preferences. Transitionary risks are real, and everyone must play their part to mitigate them. It’s not just an economic imperative, it is simply the right thing to do,” he said.