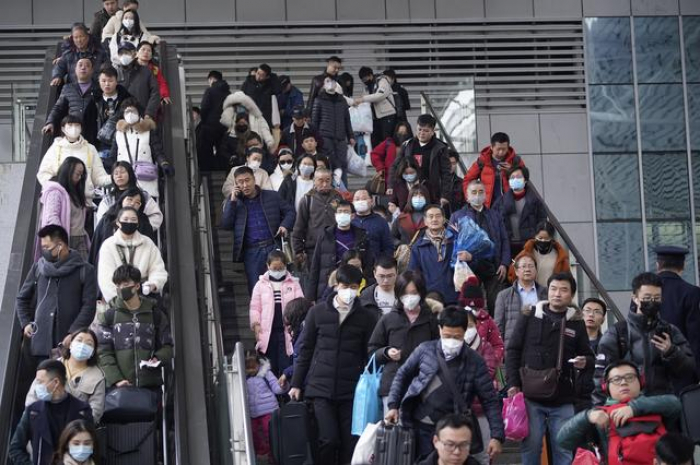 The death toll from the coronavirus outbreak in China climbed to six On Tuesday as authorities reported a surge in new cases, with fears that hundreds of millions of people traveling for the Lunar New Year holiday will accelerate the infection rate, Reuters reported.

Officials confirmed that the new mystery virus can spread between humans and said 15 medical staff have now been infected, stoking fears about an international pandemic and prompting airport authorities around the world to step up screening of travelers arriving from China.

The latest update on the outbreak that began in the central city of Wuhan sent shivers through financial markets, as the World Health Organization called a meeting for Wednesday to consider declaring an international health emergency.

The National Health Commission (NHC) put the number of confirmed cases at 291 by the end of Monday, but individual provinces gave more up-to-date information on Tuesday showing a widening geographic spread.

The NHC said another 14 cases were reported in the southern province of Guangdong, five in the capital Beijing and another two in Shanghai by the end of Monday.

But on Tuesday, the virus was confirmed to spread to more parts of the country, with the eastern province of Zhejiang reporting five cases, and the northern city of Tianjin reporting two.

“Information about newly reported infections suggest there may now be sustained human to human transmission,” WHO Regional Director for the Western Pacific Takeshi Kasai said in an email statement.

The scare brought back bad memories of Severe Acute Respiratory Syndrome (SARS), another coronavirus that broke out in China in 2002/2003, resulting in the death of nearly 800 people in global pandemic.

Two cases have already been identified in Thailand, one in Japan and one in South Korea, while the Philippines reported on Tuesday its first suspected case.

Taiwan, the self-ruled island that China claims as its own, also confirmed its first case, a woman who had returned from working in Wuhan, on Tuesday.

Taiwan, which has close economic and people-to-people links with China despite political tensions, on Monday set up an epidemic response command center to coordinate the island’s response to the virus. More than 1,000 beds were prepared in isolation wards in case the virus spreads further.

The mounting anxiety was transmitted to regional markets.

China's onshore yuan CNY= fell 0.6%, its biggest daily drop since Aug. 26, 2019, while airline and travel stocks fell across the region.

European shares also slipped on mounting concerns about the impact of the outbreak, with luxury goods firms particularly hard-hit on worries about weaker demand from Chinese consumers.

The virus can cause pneumonia, with symptoms including fever and difficulty in breathing. As those symptoms are similar to many other respiratory diseases, extra screening is needed.

AIRPORT SCREENING
The origin of the virus has yet to be identified, but the primary source is most likely animal, according to WHO. Chinese officials have linked the outbreak to a seafood market in Wuhan.

“The outbreak of a SARS-like coronavirus in Wuhan is developing into a major potential economic risk to the Asia-Pacific region now that there is medical evidence of human-to-human transmission,” said Rajiv Biswas, Asia Pacific Chief Economist for IHS Markit, in an email statement.

So far, the WHO has not recommended trade or travel restrictions but such measures could be discussed at Wednesday’s emergency meeting.

China’s National Health Commission will also give an update on the outbreak at a press briefing at 10 a.m. (0200 GMT) on Wednesday.

“China is willing to deepen its global cooperation and work with the international community to work together to deal with the epidemic,” Geng told reporters at a regular daily briefing.

Airport authorities in the United States as well as most Asian nations also are screening passengers from Wuhan.

Australia on Tuesday said it would screen passengers on flights from Wuhan, while Singapore announced it would quarantine individuals with pneumonia and a history of travel to Wuhan within 14 days prior to the onset of symptoms.

QUEUES FOR MASKS
Wuhan officials have been using infrared thermometers to screen passengers at airports, railway stations and other passenger terminals since Jan. 14.

Zhong Nanshan, head of the National Health Commission’s team of experts investigating the outbreak, said in footage shown by state television on Monday there was no danger of a repeat of the SARS epidemic so long as precautions were taken.

Images of long lines of people queuing to buy face masks were circulating widely on Chinese social media, where the outbreak was one of the top trending topics.

Some online vendors were limiting sales of masks and hand sanitizers as demand surged.

And Shanghai’s market regulator warned on Tuesday that it will punish speculators who hoard masks and other products used for preventing diseases, according to the Shanghai Observer - a web publication backed by a Communist Party newspaper.

Trip.com, China’s top online travel booking platform, said it would refund customers who cancel bookings in Wuhan this month, or whose travel plans are disrupted by quarantines or other regulatory efforts to prevent the spread of the virus.