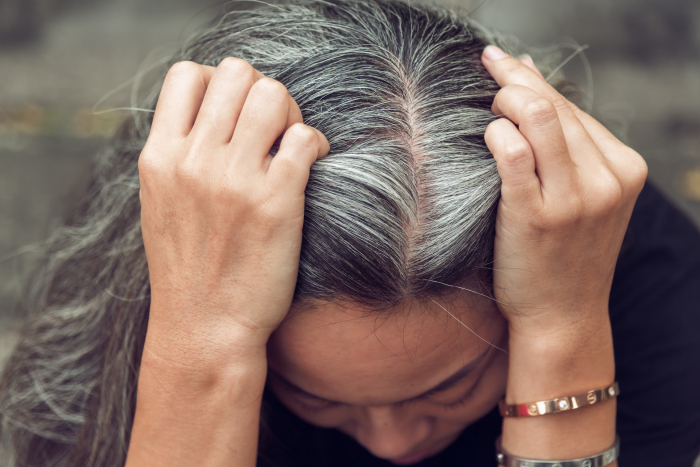 Scientists say they may have discovered why stress makes hair turn white, and a potential way of stopping it happening without reaching for the dye.

In tests in mice, stem cells that control skin and hair colour were damaged by stress from intense pain.

The US and Brazilian researchers said this avenue was worth exploring further to develop a drug that prevents hair colour loss from ageing.

Men and women can go grey any time from their mid-30s, with the timing of parental hair colour change giving most of the clues on when.

Although it's mostly down to the natural ageing process and genes, stress can also play a role.

But scientists were not clear exactly how stress affected the hairs on our heads.

Researchers behind the study, published in Nature, from the Universities of Sao Paulo and Harvard, believed the effects were linked to melanocyte stem cells, which produce melanin and are responsible for hair and skin colour.

And while carrying out in experiments on mice, they stumbled across evidence this was the case.

"We now know for sure that stress is responsible for this specific change to your skin and hair, and how it works," says Prof Ya-Cieh Hsu, research author from Harvard University.

This process then sped up the depletion of stem cells that produced melanin in hair follicles.

"I expected stress was bad for the body," said Prof Hsu.

"But the detrimental impact of stress that we discovered was beyond what I imagined.

"After just a few days, all of the pigment-regenerating stem cells were lost.

"Once they're gone, you can't regenerate pigment any more - the damage is permanent."

In another experiment, the researchers found they could block the changes by giving the mice an anti-hypertensive, which treats high blood pressure.

And by comparing the genes of mice in pain with other mice, they could identify the protein involved in causing damage to stem cells from stress.

When this protein - cyclin-dependent kinase (CDK) - was suppressed, the treatment also prevented a change in the colour of their fur.

This leaves the door open for scientists to help delay the onset of grey hair by targeting CDK with a drug.

"These findings are not a cure or treatment for grey hair," Prof Hsu told the BBC.

"Our discovery, made in mice, is only the beginning of a long journey to finding an intervention for people.

"It also gives us an idea of how stress might affect many other parts of the body," she said.