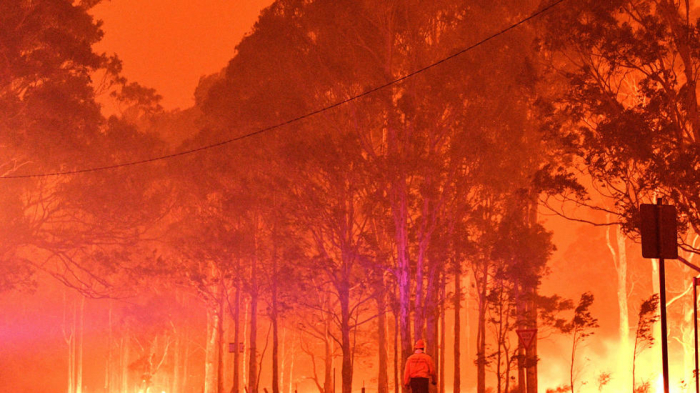 Carbon emissions from the wildfires that have ravaged much of southeast Australia are a major driver of what are predicted to be record worldwide atmospheric CO2 levels throughout 2020, Britain's Met Office said Friday, AzVision.az reports citing AFP.

The annual rise of planet-warming CO2 levels is anticipated to be among the largest since measurements began in 1958, it said.

CO2 levels, taken at the Mauna Loa observatory in Hawaii, fluctuate throughout the year due to weather patterns in the Northern Hemisphere.

But the annual trend is inexorably upwards, with record CO2 levels anticipated in May of 417 parts per million (ppm).

And 2020 is predicted to be the first year on record where CO2 levels do not dip below 410 ppm, with the annual average forecast to be 414.2 ppm.

That's the highest concentration in at least 800,000 years and possible in as many as three million years.

Richard Betts, from the Met Office Hadley Centre and University of Exeter, said that 2020 was likely to be the second year running where Earth's carbon sinks were unable to offset humanity's ever-increasing carbon emissions.

"Although the series of annual levels of CO₂ have always seen a year-on-year increase since 1958, driven by fossil fuel burning and deforestation, the rate of rise isn't perfectly even because there are fluctuations in the response of ecosystem carbon sinks, especially tropical forests," he said.

"Overall these are expected to be weaker than normal for a second year running."

Using preliminary data from the Global Fire Emissions Database, it calculated that smoke from the Australian bushfires would contribute up to 0.05 addition ppm in 2020 -- around one fifth of the increase.

"To put this in context with the year-by-year change in global anthropogenic (manmade) emissions, these initial estimates suggest that the bushfires contributed more to the annual CO2 rise than the increase in anthropogenic emissions between 2018 and 2019," it said.

The United Nations says emissions from fossil fuels, land use and transport must fall 7.6 percent annually by 2030 in order to cap global warming at 1.5C above pre-industrial levels.

But emissions are still rising every year and have grown more than 4 percent in the four years since nations struck the Paris Agreement that aims to limit temperature rises through slashing carbon pollution.

The accord is due to go into effect this year.