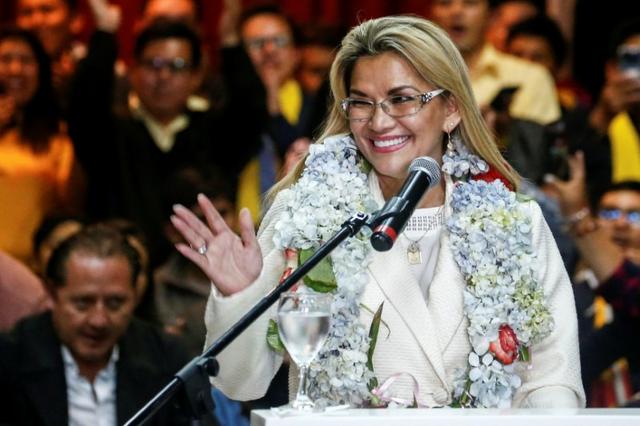 Bolivia’s interim President Jeanine Anez said on Friday that she will be a candidate in upcoming elections that will serve as a re-run of October’s disputed vote that sparked protests and prompted former leader Evo Morales to resign.

The former Senator announced her candidacy at an event in La Paz, despite previously having suggested she would not run, saying she wanted to help unite a fragmented electorate and a country left sharply divided by the recent political upheaval.

“The dispersed vote and candidates who fail to bring Bolivians together has led me to make this decision,” she said at a gathering of her social democratic party.

“We respect the decision of those who have yet to join, I extend a hand to them and assure them the door remains open to join this broad and diverse front that seeks to work for all.”

Anez assumed the presidency in November by invoking a constitutional clause that dictated she would be next in line to rule as interim leader after Morales, vice president Alvaro Garcia Linera, and other lawmakers from his socialist party resigned.

Her conservative caretaker government has shifted sharply away from policies under Morales, sparking some criticism, including cutting ties with traditional allies like Cuba and Venezuela and reforming broken alliances with the United States.

Anez, 52, a TV presenter and lawyer before shifting into politics, is a strong critic of Morales. The former president in return has criticized her administration over alleged excessive use of military force and hurting indigenous rights.

Anez had previously said it would not be correct for her to run. She told Reuters this month she was focused on unifying a fragmented opposition to Morales, who while not running himself is directing his party’s campaign.

Under her leadership, the interim government has calmed a volatile situation in Bolivia which saw scores killed in street battles late last year, established a new electoral tribunal and paved the way for new elections, to be held on May 3.

Morales, who was the country’s first indigenous president, currently lives in Argentina. He resigned on Nov. 10 after an audit by the Organization of American States found serious irregularities in the October vote. Morales denies any wrongdoing and maintains he was ousted in a coup.

The leftist, who is barred from running himself in the May election, has named his former economy minister Luis Arce Catacora as the candidate for his Movement to Socialism (MAS) party alongside former foreign minister David Choquehuanca.