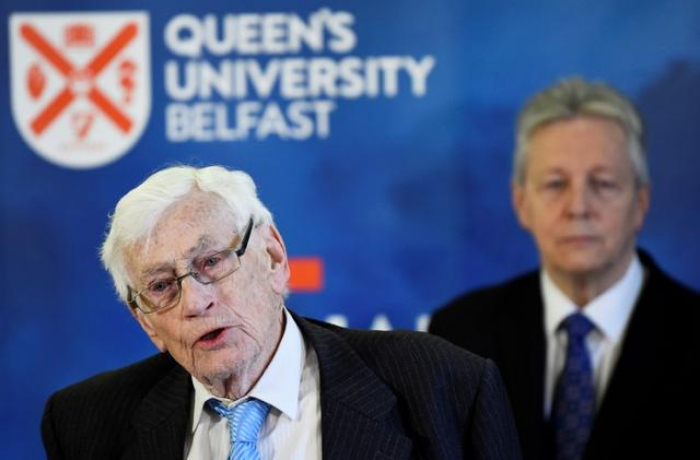 Former Northern Ireland Deputy First Minister Seamus Mallon, one of the architects of the 1998 Good Friday peace agreement, died on Friday aged 83, drawing tributes from across a political divide he helped to bridge.

Mallon was a major political figure in Northern Ireland during the three decades of violence between Catholic nationalists seeking union with Ireland and Protestant unionists wanting Northern Ireland to remain part of the United Kingdom.

He went on to jointly head the devolved power-sharing administration that followed the peace deal and was remembered as a peacemaker who recognized, in his words, that Northern Ireland’s divided communities could “live together in generosity and compassion or we can continue to die in bitter disharmony”.

Former U.S. President Bill Clinton, whose hands-on role was central to bringing an end to the conflict that killed some 3,600 people, called Mallon a hero of Northern Ireland’s peace process and a profoundly good man.

“Seamus never wavered from his vision for a shared future where neighbors of all faiths could live in dignity,” Clinton said in a statement.

“A teacher in practice and in heart, the lessons of his life and power of his example are as important today as ever.”

Irish Prime Minister Leo Varadkar praised Mallon for his unswerving commitment to constitutional nationalism when others in his community advocated violence, calling him “a peacemaker who put us on the path to reconciliation.”

Mallon died at his home in the Northern Irish county of Armagh, a spokesman for his Social Democratic and Labour Party (SDLP) said.

“THIRST FOR JUSTICE”
A marcher in the 1960s civil rights movement that preceded Northern Ireland’s violent “Troubles”, Mallon said his activism was influenced by the injustices he perceived Catholic children suffered during his time as a headmaster.

He grew up in a mainly unionist area in the British region and broke the mould when - at the height of the Troubles - he attended funerals of murdered police officers from the then British-run force when many Irish nationalists dared not.

“In the darkest days of conflict, when hope was in short supply, Seamus represented the fierce thirst for justice... Ireland has lost one of its most fierce champions for justice, equality and peace,” SDLP leader Colum Eastwood said.

Mallon famously described the 1998 accord as “Sunningdale for slow learners”, in reference to the short-lived Sunningdale Agreement brokered 25 years earlier that sought to set up a power-sharing government.

In a 2018 interview with the Press Association, he recalled sleeping on a table during the “frenetic” final days that led to the peace deal still revered around the world.

Mallon served under John Hume as deputy leader of the SDLP for more than two decades when it was the largest Irish nationalist party in the province, and also alongside Northern Ireland First Minister David Trimble of the rival Ulster Unionist Party until 2001.

Trimble, who was awarded the Nobel Peace Prize with Hume for their efforts in ending the conflict, said he had visited the dying Mallon in recent days and while they didn’t always agree during their political life, “it worked”, he told the BBC.

Politicians past and present lined up to pay tribute to a man remembered as much for his bluntness as his integrity.

British Prime Minister Boris Johnson said the former deputy first minister made an extraordinary contribution to democracy and peace in Northern Ireland. His minister for the region, Julian Smith, said that together with Trimble, Mallon had set Northern Ireland on a new democratic course.