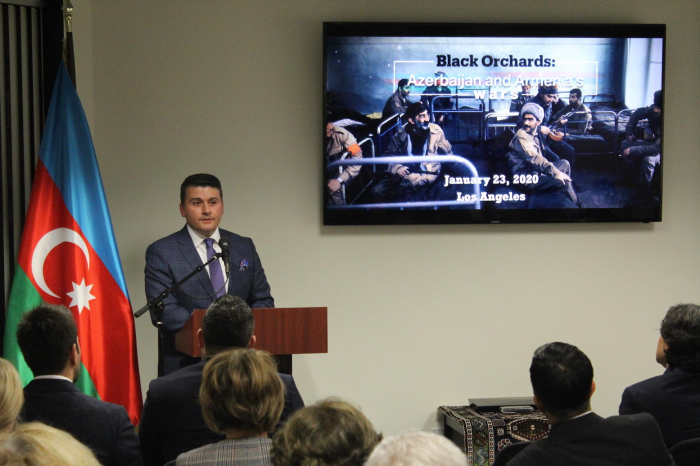 It should be noted that last week the film received the "Best Short Documentary" award at the Hollywood International Moving Pictures Film Festival in Los Angeles, the Consulate General told AzVision.az.

Hosted and organized by Azerbaijan’s Consulate General in Los Angeles, the event was attended by the film's senior producer Oubai Shahbandar and the director and producer Atakan Kerkuklu, as well as Consuls General and Honorary Consuls of various countries, faith and community leaders, media representatives, scholars, members of the local Azerbaijani community and leaders of Turkish, Pakistani, Jewish, Iranian, Korean, Latino and other communities.

Opening the event, Azerbaijan’s Consul General in Los Angeles Nasimi Aghayev gave detailed information on the history of the Armenia-Azerbaijan conflict and Armenia’s policy of aggression, military occupation and ethnic cleansing against Azerbaijan. He stated that as a result of this illegal occupation of around 20 percent of Azerbaijan’s sovereign territory, over 800,000 Azerbaijani civilians were expelled from their ancestral lands in the Nagorno-Karabakh region and seven surrounding districts. Consul General also noted that Armenia refuses to fulfill four United Nations Security Council resolutions condemning the occupation and demanding the unconditional and complete withdrawal of Armenian troops from Azerbaijan’s occupied areas.

Then the documentary film “Black Orchards: Azerbaijan and Armenia’s Wars” was screened. The film was received by the audience with much interest.

Following the screening, the film's senior producer Oubai Shahbandar spoke about the events highlighted in the film and the filming process.

Then Oubai Shahbandar and Atakan Kerkuklu responded to various questions from the audience on the film and the Armenia-Azerbaijan conflict.