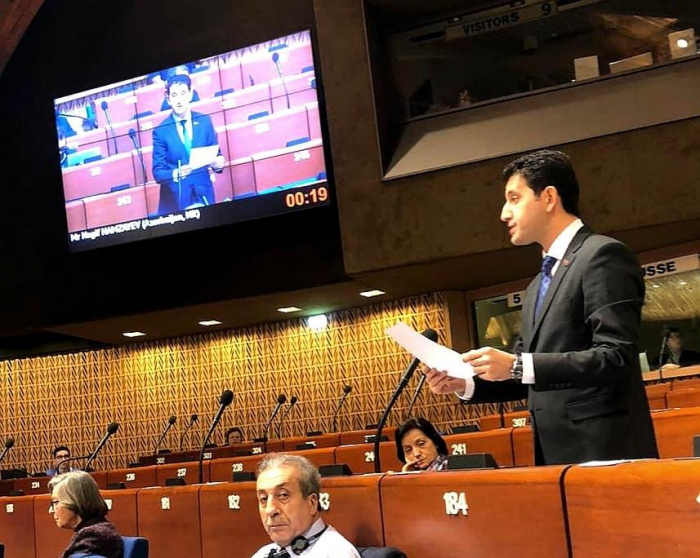 Azerbaijan evaluates the recommendations of the Council of Europe and always tries to act in the interests of both parties, said Nagif Hamzayev at the winter session of the Parliamentary Assembly of the Council of Europe in Strasbourg on January 28 at a hearing in the PACE Committee on Legal Affairs and Human Rights on the issue of political prisoners in Azerbaijan, AzVision.az reports citing Trend.

“However, there are times when our thoughts do not intersect,” Hamzayev said.

Nagif Hamzayev noted that the information provided by political prisoners in Azerbaijan is incorrect.

He said that I am disappointed with the unjust and unreasonable attitude towards my country.

Hamzayev noted that reforms have been carried out in Azerbaijan in all areas, in particular, the electronicization of the justice system and the existence of a legislative framework that reflects the basic principles of the European legal system.

By a decree of President Ilham Aliyev, in March 431 people were pardoned, and 399 of them were released from the rest of the prison.

Later, Nagif Hamzayev spoke about a terrorist act committed against the people of Azerbaijan under the leadership of Armenia, especially Sargsyan: “More than 1 million Azerbaijanis cannot visit their homeland. Not to mention the physical and spiritual damage to the well-being of our state, anti-Azerbaijani forces are still trying to undermine the image of our country and create chaos in our relations with the Council of Europe. For many years, as a result of the joint efforts of anti-Azerbaijani forces, Azerbaijan was subjected to prejudice and discrimination against political prisoners. We believe that a favorable policy will be created to conduct a policy based on the principles of mutual understanding and respect. "