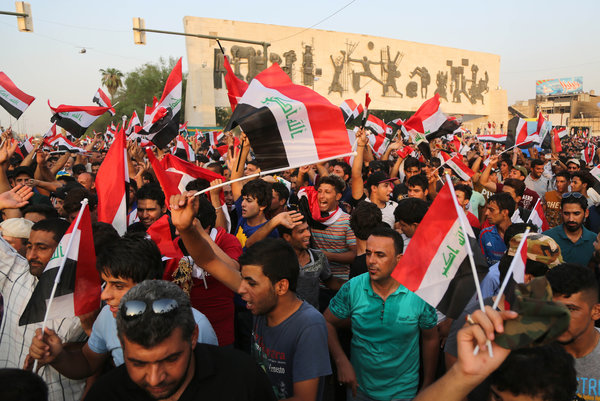 His appeal echoed that of the demonstrators in Baghdad and across the mainly-Shiite south who have demanded a snap vote and an independent figure to replace the current caretaker premier.

In a sermon delivered by his representative in the shrine city of Karbala, Grand Ayatollah Ali Sistani said it was "imperative to speed up holding early elections so that the people will have their say".

He said Iraq must "accelerate the formation of a new government" and "take the necessary steps to hold free and fair elections as soon as possible".

Parliament has passed a new electoral law but it failed to address most of the protesters' specific demands and President Barham Saleh has yet to sign it into effect.

And while pressure from Sistani and the street forced Prime Minister Adel Abdel Mahdi to resign in December, he has stayed on in a caretaker capacity as political parties have yet to agree on a consensus replacement.

According to Iraq's constitution, parliament's largest bloc must nominate a prime minister within 15 days of legislative elections.

The candidate is then tasked by the president with forming a government within one month.

But Iraq is in a legal grey area, as the constitution makes no provisions for the premier's resignation and the 15-day period since Abdel Mahdi stepped down has long since expired.

This week, Saleh told the deeply divided parliament it had until Saturday to name a candidate, otherwise he would nominate someone unilaterally.

As the clocked ticked, political parties were in crisis talks to agree on a replacement but the absence of two key powerbrokers has complicated the meetings.

Top Iranian general Qasem Soleimani and Iraqi paramilitary commander Abu Mahdi al-Muhandis were killed in a US drone strike in Baghdad on January 3 that rocked the region.

In the closing remarks of his sermon, Sistani also spoke out against the controversial Middle East peace plan unveiled by US President Donald Trump on Tuesday.

"The marjaiyah (the Shiite religious leadership) strongly condemns the unjust plan, which was recently revealed, to grant legitimacy to the occupation of more usurped Palestinian lands," he said.