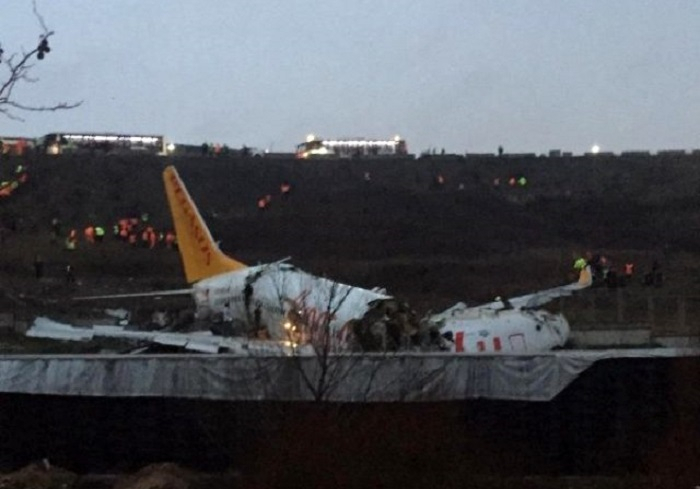 A passenger plane skidded off the runway at an airport in Istanbul on Wednesday, killing three people and injuring 180 others, officials said, AzVision.az reports citing Anadolu Agency.

Pegasus Airlines flight PC2193 was arriving from Turkey's Aegean province of Izmir at Sabiha Gokcen International Airport when it skidded off the runway while landing, said Turkey’s Transportation and Infrastructure Minister Cahit Turhan.

Television footage showed the nose of the plane almost completely separated from the rest of the fuselage, which burst into flames following the crash.

"According to the information we obtained, after the hard landing, the plane drifted," said Turhan.

According to the airline company, 22 foreign passengers from 12 countries were on board, Yerlikaya added.

After skidding off the runway, the plane drifted around 50 meters (164 feet), Yerlikaya said.

"Then it fell from a height of around 30 meters [98 feet] here, where there is a connection road from the TEM highway to the E-5 highway."

Prosecutors in the capital Ankara launched an investigation into the incident.

The airport, which was closed after the accident, was reopened for flights.

"According to recent data, unfavorable weather conditions caused the crash. The plane crashed on the landing strip from the height of 30 meters. So far, 120 people have been taken to hospital," he said on Turkey’s NTV channel.

A Boeing 737-800 plane travelling from Izmir to Istanbul skidded off the runway earlier on Wednesday at Istanbul’s Sabiaha Gokcen airport, subsequently catching fire. There were 177 passengers and 6 crew on board the plane. All passengers and crew have been evacuated. There have been no reports of casualties.

The Pegasus Airlines plane was arriving from Turkey's Aegean province of Izmir at Sabiha Gokcen International Airport when it skidded off the runway during landing, Turkey’s Transportation and Infrastructure Minister Cahit Turhan said.

Television footage showed the plane separated from its fuselage after it burst into flames following the crash. Several firefighters and paramedics were dispatched to the area.

There are no casualties among 177 people -- including two children and six crew members, Turhan said.

"Our teams are currently evacuating the passengers," he added.

"According to the information we obtained, the plane skidded off the runway and drifted to the land as a result of the hard landing," said Turhan.

Prosecutors in capital Ankara launched an investigation into the incident. The airport has been temporarily closed to air traffic.