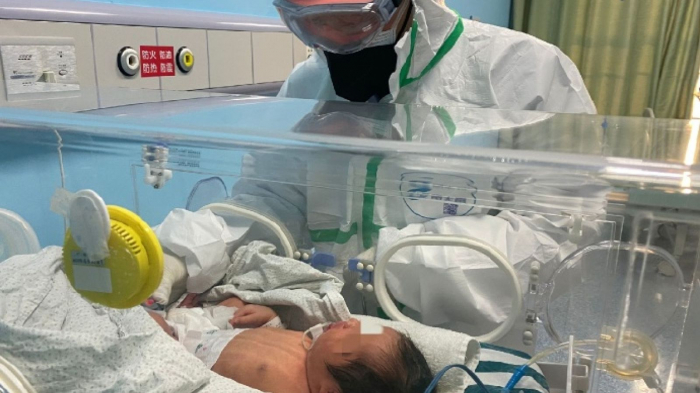 Doctors said the newborn’s mother had tested positive for the illness before giving birth on Feb. 2, raising the possibility the infection could be spread from mother to infant in the womb, Business Insider reported.

The People’s Daily China newspaper shared a photo on Twitter that reportedly showed the infant in an incubator at the Wuhan children’s hospital.

This case raised the possibility that the virus, which has killed more than 400 people since December, could go from person to person while the child is in the womb, during childbirth or through breast milk.

“We should be concerned about the possible new transmission route of the coronavirus,” Zeng Lingkong, a senior physician at the Wuhan children’s hospital’s neonatal department, told the South China Morning Post. . He added that pregnant people should stay away from people with the coronavirus.

“It’s quite possible that the baby picked it up very conventionally — by inhaling virus droplets that came from the mother coughing,” Morse told Business Insider.

In total, there have now been more than 24,000 reported cases of the new coronavirus in China.

Doctors said the baby’s vital signs were stable, and it had no fever or cough but was experiencing shortness of breath, Reuters reported citing state broadcaster CCTV.

The Wuhan Children’s Hospital had set aside an area to treat pregnant women with suspected symptoms, the South China Morning Post said citing a CCTV report.