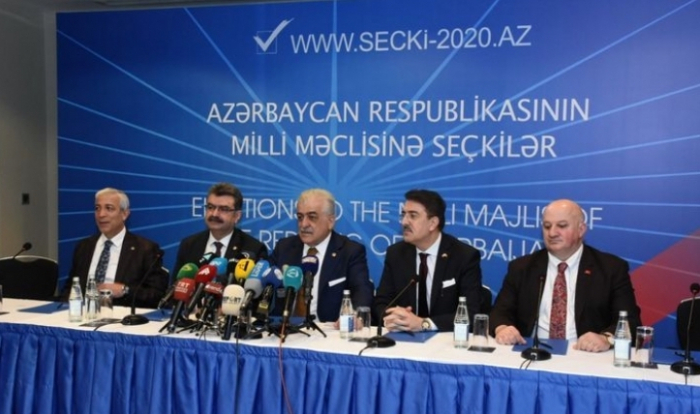 “We express our gratitude to Azerbaijani people. By determining their future, people casted a ballot for the candidate they wanted”, said member of the Observation Mission of the Grand National Assembly of Turkey, head of Turkey-Azerbaijan Inter-parliamentary Friendship Group Shamil Ayrim, secki-2020.az reports.

Member of Grand National Assembly of Turkey (GNAT) Orhan Erdem said on the voting day the observers were divided in two groups and conducted observations in Baku and Sumgait, and a day earlier they tracked the process of preparation for election in Guba region: "We witnessed very quiet and smooth implementation of the elections. My attention was mainly attracted by the fact that no police or persons in military uniform were present at the polling stations. This as such also showed that people cast their vote easily and comfortably. The development of democracy to such a high level in Azerbaijan in a short period gratifies us. I wish the elections to be beneficial for the Azerbaijani people".

Member of GNAT Yunus Kılıç said the participation of over 1300 candidates and 19 political parties testifies to implementation of the election in unbiased and competitive environment: “The availability of cameras at the polling stations, the observers’ opportunity to track the process from any place, and the voters’ chance to vote in any polling booth, and in general, the organizational works were at a high level: "Azerbaijan invited a great number of international observers to track the election. This as such shows openness and transparency of Azerbaijan. Everybody could easily and comfortably observe the voting process at the polling stations".