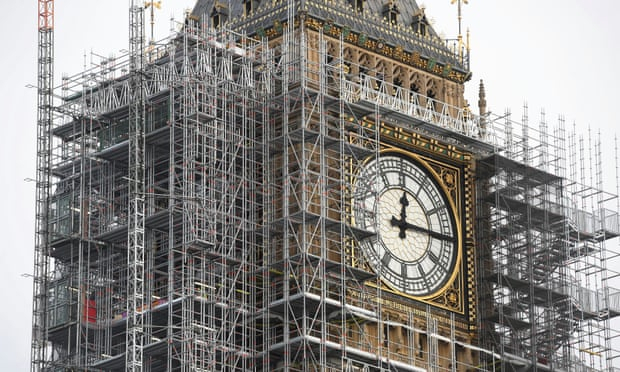 Conservation work on the 177-year-old structure, which is supposed to be completed at the end of next year, led to the discovery by the project team after intrusive surveys, parliamentary officials have disclosed.

The 96-metre tower, which has become a national symbol since its completion in 1856, has been mostly hidden from view since efforts to restore it began in 2017.

Critics of the £3.5bn restoration and renewal programme will seize upon the rising cost as a small example of the huge amount that will mount up once peers and MPs move out in four years to allow work to begin across the rest of the building.

Ian Ailles, the director general of the House of Commons, said the task of restoring the tower “had been more complex than we could have anticipated”.

“With a 12 sq metres [130 sq ft] footprint and a prime location right in the middle of a busy working parliament, understanding the full extent of the damage to the tower was impossible until the scaffolding was up.

“Alongside other issues, such as the impact of often inappropriate conservation methods used by our predecessors, the corrosive levels of pollution in the atmosphere and the discovery of asbestos in unexpected places, we have only now been able to fully understand the full investment required for this project,” he said.

Damage inflicted by German bombing during the second world war had was more extensive than first thought.

Although the tower survived the bombing, its roof and dials were damaged in an air raid in May 1941 which destroyed the main House of Commons chamber.

The full scale of the conservation effort, which is on track for completion in late 2021, was only revealed once the project team was able to begin intrusive surveys for the first time, officials said.

The House of Commons and House of Lords commissions were told that to restore the tower to its previous splendour, the budget would need to rise from £61.1m to £79.7m.

Both commissions heard that painstaking examination of the tower had uncovered decay and damage to hundreds of intricate carvings, asbestos in the belfry, extensive use of toxic lead paint, broken glass in the clock dials and the need to employ a specialist clock expert.

In 2017, work began to examine and repair the tower from the gilt cross and orb at its tip to the bottom of its 334-step staircase.

Many hundreds of specialist craftspeople from all around the UK are contributing to this conservation project, employing traditional trades, including stone masonry, gilding, glass cutting and horology.

If approved by accounting officers of each House, a new budget of £79.7m will be set for the project’s completion.

A spokesperson for the House of Commons commission said its members were “extremely disappointed” that more money was required, but they had been assured no more would be asked for after this.