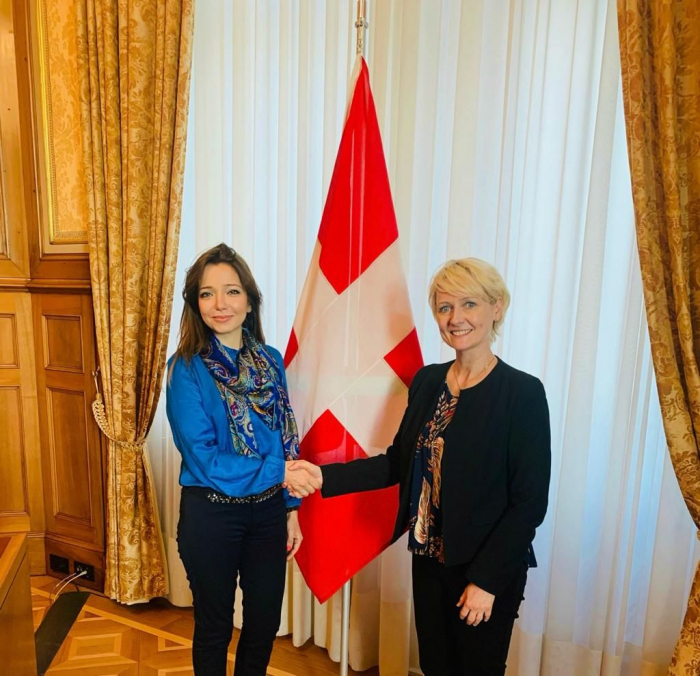 The ties of cooperation between the Azerbaijani and Switzerland parliaments were highly appreciated, as well as the views on the prospects for further cooperation were exchanged during the meeting.

Ambassador Ibrahimova noted the importance of inter-parliamentary cooperation on development of the Swiss-Azerbaijani relations, and highly appreciated the recent visit of Jean-Rene Furney, the President of the upper house of the Federal Assembly to Baku. She also mentioned the fact that Swiss Azerbaijani Parliamentary Friendship Group is one of the few friendship groups in the National Council.

Ambassador Ibrahimova thanked for the opportunity for the first time ever presentation by herself planning during the March session of the Parliament about Azerbaijan. It will be an important event, since the parliamentarians will receive the necessary information directly from the Ambassador.

Khanim Ibrahimova informed her counterpart about the parliamentary elections that were held in Azerbaijan on February 9 and called it as a new manifestation of democracy in the country. She noted that over 1,300 candidates had never previously participated in the parliamentary elections in Azerbaijan. International organizations have shown tremendous interest in these elections About 900 international observers arrived in the country and new parliament is composed of 20 percent women.

The sides also discussed bilateral economic and political relations between Azerbaijan and Switzerland, structural reforms carried out in Azerbaijan under the leadership of President Ilham Aliyev, and exchanged views on the Armenian-Azerbaijani Nagorno-Karabakh conflict.

Referring to the international reputation of Azerbaijan, Ibrahimova noted that Azerbaijan is chairing organizations such as the Non-Aligned Movement and GUAM.

Isabelle Moret expressed her satisfaction with the achievements of Azerbaijan and wished her success in future.