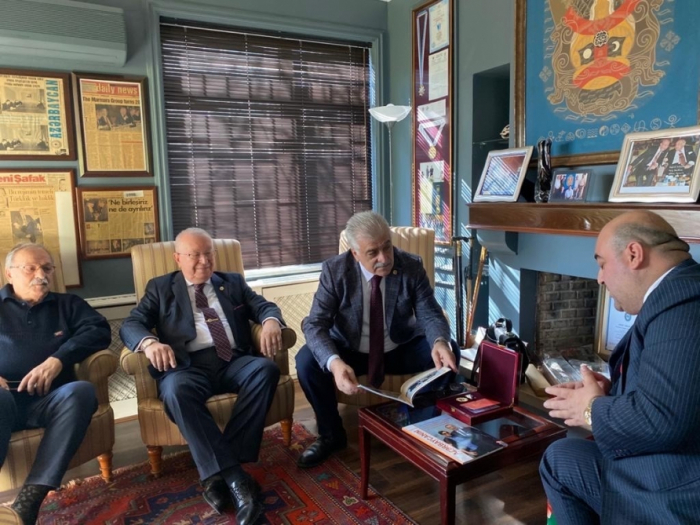 In the event held at the administrative building of "Marmara Group" Strategic and Social Studies Foundation in Istanbul, Turkey, the editor-in-chief of the "My Azerbaijan" international magazine Emil Nasirli presented the "Pride of Azerbaijan” Golden Order of the magazine founded by him to Azerbaijani politician in origin, also, living and acting in Turkey, head of the Turkey-Azerbaijan inter-parliamentary friendship group Samil Ayrim.

Addressing the meeting, Emil Nasirli, editor-in-chief of Azerbaijan International Magazine, spoke about the constant strengthening of the Azerbaijani-Turkish relations based on historical friendship, mutual trust, sincere relations, high-level cooperation, the native relations of these two countries by possessing the same genocide, language, religion, culture and many other relations, the fact that two countries always became closure to each other in happy and sad days.

"The relations between the socio-political, socio-economic organizations of the two countries, as well as the media organizations in the Azerbaijani-Turkish relations, have a special direction," said Emil Nasirli. “Our countryman, the head of the Turkey-Azerbaijan Inter-parliamentary Friendship Group, had a great role in the development of these relations.” Emil Nasirli praised the role of Ayrim in supporting the two countries' interconnectedness and expressed with their willingness underlining to work more closely with both sides in the development of Turkish-Azerbaijani relations. Apart from this, Emil Nasirli said that Turkey and Azerbaijan are active and key participants in the regional cooperation process and that both countries effectively use their economic and energy potential and also, notified to the participants of the meeting that the geopolitical position to enhance bilateral and regional cooperation is efficiently used. Emil Nasirli especially noted in his speech that he made efforts to ensure the territorial integrity of Azerbaijan, always urging the Turkish government to consistently defend the just demands of Azerbaijan from the first days of the Armenia-Azerbaijan Nagorno-Karabakh conflict, giving speech by the require to leave immediately and unconditionally from the historical lands of Azerbaijan invaded by Armenia.

Well-known Azerbaijani politician and head of the Turkey-Azerbaijan inter-parliamentary friendship group Samil Ayrim first thanked editor-in-chief Emil Nasirli and the editorial staff of the International magazine "My Azerbaijan" for their award of the Golden Order "Pride of Azerbaijan". Speaking about the importance of expanding relations in the context of the Azerbaijani-Turkish relations covering all levels of the society of these relations in this period, Samil Ayrim said in detail that they cover a wide range of activities aimed at contributing to bilateral relations. Samil Ayrim spoke about the Nagorno-Karabakh problem in his speech noted that he declared in the level of high state and government representatives that they will never change their principled position about building relations and create any economic relations with Armenia until the fair settlement of this issue by Turkey informing the acceptation in the frame of agreed conditions of settlement of the conflict only by Azerbaijan.

Speaking at the meeting, Akkan Suver, the Chairman of the Marmara Group Strategic and Social Studies Foundation of Turkey, noted that Turkey-Azerbaijan relations have played a very important role for both countries and the region at the moment, he also, noted that, the existence of strategic partnership between the two countries and successful development of bilateral relations in all spheres. At the same time, Akkan Suver underlined that expanding cooperation and strategic partnership between the two countries has become an indicator of stability in the region.