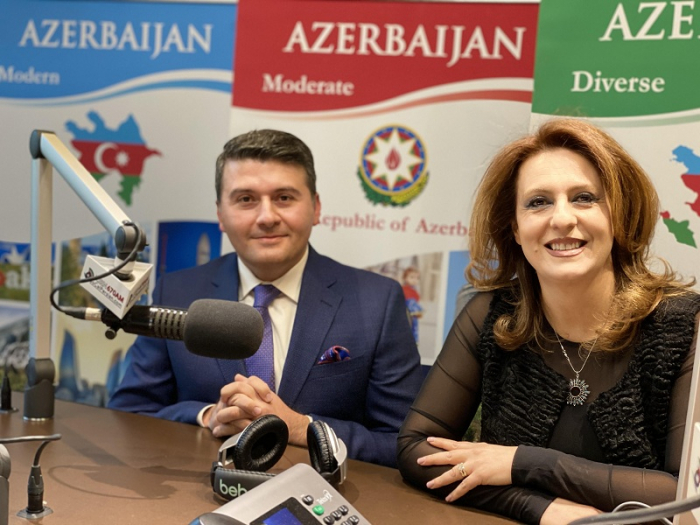 KIRN Radio, the largest Farsi-language radio station in the United States and one of the largest in the world, aired a live interview on Azerbaijan featuring Azerbaijan’s Consul General and the Dean of the Los Angeles Consular Corps Nasimi Aghayev.

Consul General Aghayev was interviewed by Debbie Amini, the host of the famous “One World, One Community” program. Live video of the interview was also broadcast on the radio’s official Youtube channel, the Consulate General of Azerbaijan told AzVision.az.

During the interview Consul General Nasimi Aghayev informed the listeners about Azerbaijan’s history of independence and stated that in 1918, the people of Azerbaijan established the very first Republic in their history - the Azerbaijan Democratic Republic. He noted that it was also the first ever secular democracy among all Muslim nations and the first majority-Muslim nation to grant women the right to vote.

The Consul General gave detailed information about Azerbaijan’s ancient traditions of multiculturalism, interfaith acceptance and harmony. Aghayev noted that Muslims, Jews, Christians and representatives of other faiths have been living together in peace, dignity and mutual respect for centuries in the majority-Muslim Azerbaijan.

Speaking of Azerbaijan’s relations with various Iranian communities in Los Angeles, the Consul General stressed that last November the Nessah Synagogue - the largest Persian Jewish synagogue in the US - hosted an event with Azerbaijani survivors of the war that took place between Armenia and Azerbaijan in the early 1990s and that resulted in the military occupation and ethnic cleansing of 20 percent of Azerbaijan’s territory by Armenia.

It is noteworthy that Los Angeles (and Southern California in general) is home to a large Iranian-American community (of both Muslim, Christian, Jewish, Baha’i, Zoroastrian and other backgrounds). With population estimates up to 500,000, Southern California boasts the largest concentration of Iranians in the world, outside of Iran.