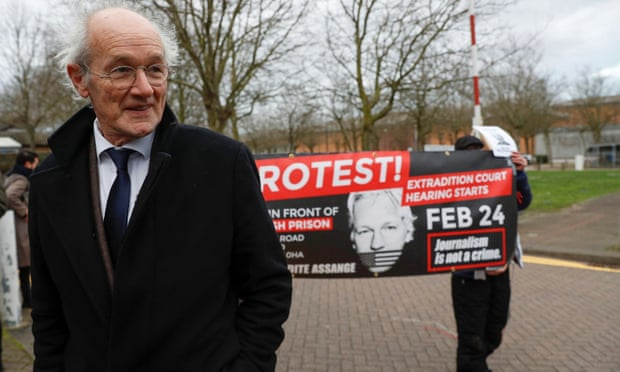 Julian Assange’s father has claimed his son was “harassed” by a prison cell search the day before his extradition hearing was planned to begin, the Guardian reported.

“For the life of me I can’t understand why Julian Assange is in jail having committed no crime, with family here that he can come and live with,” he said.

“Bail ought to be given immediately if the extradition order isn’t dropped.

“Julian had a harassment today. He goes to court tomorrow. They searched his cell this afternoon just before he came down to see us.

“This plague of malice that emanates from the Crown Prosecution Service to Julian Assange must stop immediately.”

Shipton was accompanied by Greek economist Yanis Varoufakis. They were met by representatives from Reporters Without Borders, an organisation that defends freedom of the press, as they left the prison.

Shipton said it was “distressing” and “very upsetting” to see his son in jail, adding that he had told him his whole family would be supporting him.

Varoufakis said Assange was in a “very dark place” due to spending more than 20 hours a day in solitary confinement. Describing the Australian as a “force of nature”, he said he was not being allowed to exercise in the gym with other inmates.

“We have to stop this extradition in the interests of 300 years of modernity, 300 years of trying to establish human rights and civil liberties in the west and around the world,” Varoufakis added.

Christophe Deloire, secretary general of Reporters Without Borders, said journalism “will be in danger” at the Woolwich crown court hearing.

He said: “If Assange would be extradited to the US, it would be the sign that journalism is considered espionage and it would endanger all journalists who want to uncover the lies of governments whatever the country.”

Assange, 48, is wanted in the US on 18 charges over the publication of US cables a decade ago, and if found guilty could face a 175-year prison sentence.

He is accused of working with former US army intelligence analyst Chelsea Manning to leak hundreds of thousands of classified documents.

Last week Shipton warned his son’s extradition would be akin to a “death sentence”. He addressed the hundreds of Assange supporters after they marched through central London to Parliament Square on Saturday to protest against his son’s potential extradition.

On Sunday evening, Assange supporters were setting up tents outside the court building.