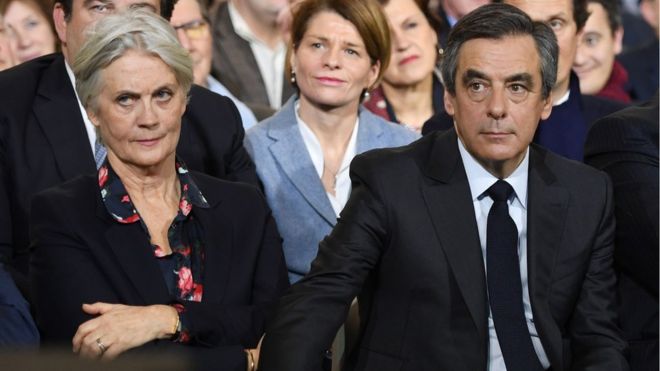 Former French Prime Minister François Fillon is due in court for his role in a "fake jobs" scandal.

He is accused of paying his Welsh wife Penelope hundreds of thousands of euros for work she allegedly never did when she was employed as his parliamentary assistant.

Both are scheduled to appear on Monday. They deny the allegations.

The scandal - dubbed PenelopeGate - began in 2017, when Mr Fillon seemed favourite to win the presidency.

Fillon payment inquiry: What you need to know
Mr Fillon could face up to 10 years in prison if convicted. The trial is scheduled to run until 11 March.

Who is François Fillon?

Mr Fillon has been in politics for decades. After serving as an MP, Senator, and in a number of ministerial roles, he became France's prime minister between 2007 and 2012 under former President Nicolas Sarkozy.

Ahead of the 2017 presidential election, he won the centre-right Republican party's presidential primary, and in January 2017 was the clear frontrunner in the polls.

But his bid for the top job fell apart later that month.

Mr Fillon denied the allegations. He said his opponents were trying to sabotage his campaign through his wife, and vowed to press on with the election.

As the scandal grew he apologised "profusely" for employing family members, saying that though legal the practice had caused "mistrust".

But his poll ratings dropped sharply. He came third in the first round of voting, missing out on the second-round run off.

According to the magazine, Mrs Fillon made €100,000 writing just a handful of articles for a literary publication La Revue des Deux Mondes. The magazine is owned by a billionaire friend of the family, Marc Ladreit de Lacharrière.

From 2002-2007, Mrs Fillon worked for her husband's successor as an MP, Marc Joulaud. He has also been placed under formal investigation.

And during a brief stint working for her husband between 2012-2013, Mrs Fillon allegedly did not have a work email or parliamentary pass.

Two of their children have also been caught up in the scandal.

Marie and Charles Fillon were both paid for legal work by their father's office - yet Le Canard Enchaîné reported that neither were qualified lawyers at the time.