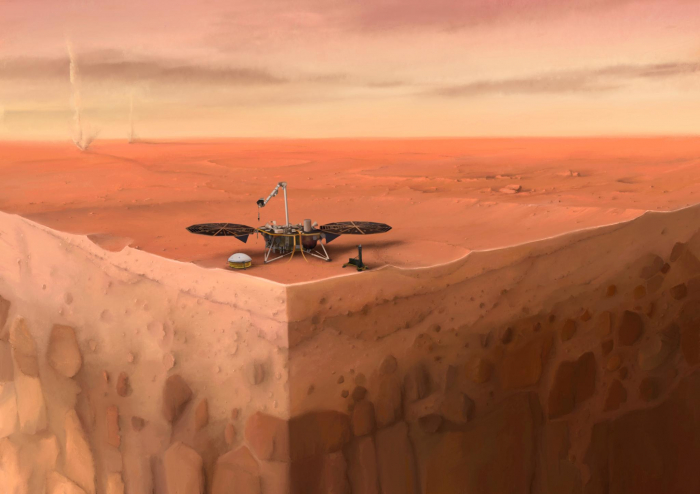 A Nasa spacecraft sent to search beneath the surface of Mars has sent back its first major findings.

The research shows that the planet is definitely seismically active, or prone to quakes. And those quakes could shed important new light on how Mars came to be formed, as well as the rest of the Solar System.

Other findings from the InSight spacecraft show that the Martian magnetic field is ten times stronger than expected.

InSight landed on Mars in November 2018, after a journey that saw it travel 300 million miles over a period of nearly seven months. Since then, it has been examining what exists underneath the Martian surface.

Dr Bruce Barnerdt, InSight principal investigator and lead author on one of the studies, said: "We finally have, for the first time, established that Mars is a seismically active planet."

The first so-called "Marsquake" was recorded by InSight's onboard sensors in April 2019.

Since then, it has detected more than 450 quivers, much smaller than anything that would be felt on Earth.

But two of them were big enough for scientists to be able to trace them back to their source.

They came from a geologically active area known as Cerberus Fossae, around 1,000 miles east of Elysium Planitia.

Researchers say this provides strong evidence that seismic activity on Mars is not only a consequence of the cooling and shrinking of the planet but also caused by tectonic plates running into each other or moving apart.

The seismic energy released on Mars is something between that of the Earth and the Moon, the researchers said.

Dr Domenico Giardini, of ETH Zurich in Switzerland and lead author on one of the studies, added: "Marsquakes have characteristics already observed on the Moon during the Apollo era, with a long signal duration (10 to 20 minutes) due to the scattering properties of the Martian crust."

The scientists hope reading the seismic waves on Mars will reveal information about what the planet's interior looks like and how it is changing.

"These low-frequency events were really exciting, because we know how to analyze them and extract information about subsurface structure," said Vedran Lekic, an associate professor of geology at UMD and a co-author of the study.

"Based on how the different waves propagate through the crust, we can identify geologic layers within the planet and determine the distance and location to the source of the quakes."

In addition, the researchers found Martian weather to be similar to that of Earth but with key differences, such as stronger daily atmospheric pressure and temperature fluctuations.

Dr Don Banfield, of the Centre for Astrophysics and Planetary Science at Cornell University in the US and a lead author on one of the studies, told the PA news agency: "The atmosphere is so thin that it can heat up and cool down much faster than Earth's.

"At night, it cools to as low as about -95C, while in daytime, it reaches temperatures near 0C.

Evidence of dust devils, which are whirls of Martian soil whipped up by the wind that spin like a tornado at nearly 60mph, were observed a month after InSight touched down on Mars.

He told PA: "We are still working to understand what these waves can teach us about Mars.

"This will likely receive lots of attention over the coming years."

Preliminary findings from InSight's first 10 months on Mars are published in a series of papers in Nature research journals.

The £633 million Nasa mission is expected to continue for another year.