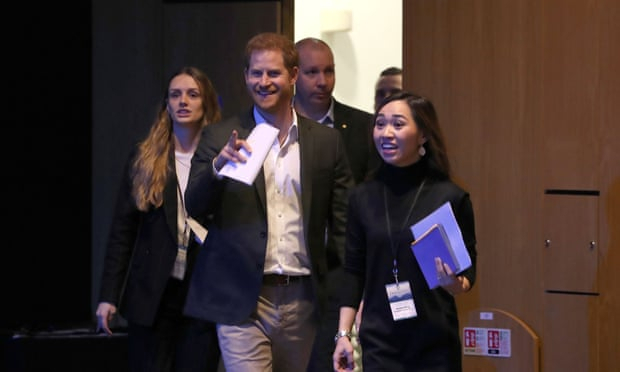 The Duke of Sussex asked to be introduced as simply Harry as he described Scotland’s tourism industry as being at the “forefront” of making the sector more sustainable, the Guardian reports.

The prince was speaking at the Travalyst event at the Edinburgh International Conference Centre on Wednesday.

The duke would normally be addressed as Sir or His Royal Highness – a title he will no longer use when he steps down as a working royal on 31 March.

The former Labour adviser and broadcaster Ayesha Hazarika, who was hosting the conference, introduced the duke to the stage as Harry after the royal had asked for just his first name to be used.

He told the audience the industry in Scotland was at the forefront of making the sector greener, saying it could set an example for the rest of the UK and the world.

“We want to hear truths and perspectives from across the industry,” he said. “We don’t need to reinvent the wheel, a lot of great work has already been done. But our research again shows that many of these endeavours have failed to reach the conscientiousness of consumers.”

He added: “We have to work together … to scale up the good practices already being used around the world. Scotland is a great example of what we mean. There is a holistic ambition to Scotland’s intent that can be adopted across the UK and even around the world.

“Scotland is one of the fastest-growing tourism destinations worldwide and it’s at the forefront of a more sustainable approach, which is why your insight into these issues is so incredibly valuable.”

The duke founded the Travalyst coalition along with brands including Booking.com, Skyscanner, Tripadvisor, Trip.com and Visa.

The conference in Edinburgh on Wednesday will allow Harry and his Travalyst team to gain feedback from the travel industry on new ideas for sustainability, including creating an online scoring system to show the eco-friendly status of aviation, accommodation and holiday experiences.

About 100 people from the tourism and travel industries invited to join the working summit.