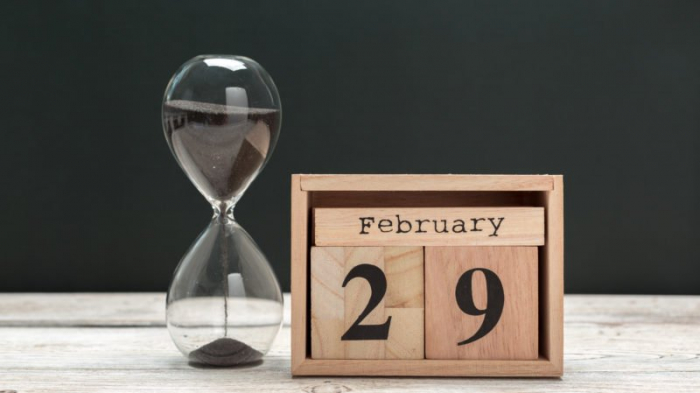 One solar year (that is, the amount of time it takes our planet to accomplish one full rotation about the sun) takes roughly 365 days, 5 hours, 48 minutes, and 46 seconds. That extra five-or-so hours nobody likes to talk about are precisely why we have leap years: the 366-day years that occur every four years, encourage women to propose to men, and make celebrating birthdays very confusing for 1/1,461th of the population. Here are nine reasons Leap Day is even more special than you think.

1. The rule: Leap Day happens every four years unless it doesn’t

The point of leap years is to help adjust our Gregorian calendar (aka, the 365-day calendar you can find on your desk or phone) to the solar calendar, and make sure we celebrate solar events like the spring and autumn equinoxes with some regularity every year. Even adding an extra day to February every four years doesn’t quite do the trick, which is why scientists sometimes call for a Leap Second like they did in 2015 on June 30th at 11:59:60 pm.

2. What’s crazier than February 29th? A woman proposing to a man, says history.

You’re not the only one who thinks leap years are silly. After Pope Gregory XIII instituted the Gregorian calendar in 1582, the idea of adding February 29th every four years seemed so ridiculous that a British play joked it was a day when women should trade their dresses for “breeches” and act like men. The play was meant as satire, but some early feminists must have been inspired; by the 1700s, women were using Leap Day to propose to the men in their lives. The tradition—now called Bachelor’s Day or Sadie Hawkins Day—peaked in the early 1900s and continues today in the UK, where some retailers even offer discount packages to women popping the question.

3. The Salem witchcraft trials are connected to Leap Day

If we’re looking at history a bit closer to home in the United States, then we should focus on Massachusetts. The Salem witchcraft trials weren’t a fun time in colonial America. There was a particularly negative connection with Leap Day. The first warrants for arrest went out on February 29th, 1692 for the Salem witchcraft trials. And you thought Friday the 13th was spooky! Find out some strange things that really happened on Friday the 13th.

4. It’s rare to be born on Leap Day…but what about dying on Leap Day, too?

According to the World Heritage Encyclopedia, in the 1800s, the British-born James Milne Wilson, who later became the eighth premier of Tasmania, “was born on a leap day and died on a leap day.” Wilson died on February 29th, 1880, on his “17th” birthday, or aged 68 in regular years. Maybe that’s not that crazy though, since you are more likely to die on your birthday.

5. What do Tony Robbins and Gioachino Rossini have in common?

They are both extremely successful in their respective fields—but more to the point, they were both born on February 29th. The odds of being born on February 29th are 1 in 1,461, which makes it particularly rare for one leapling, as they are called, to meet another. Do you know how many living people around the world share your birthday?

Rarer still is the possibility that three children in the same family would be born on three consecutive Leap Days, but that’s exactly what happened with the Henriksen family of Norway. Heidi Henriksen was born on 2/29/1960, her brother Olav four years later on 2/29/64, and baby Leif-Martin four years after that on 2/29/68. According to many government agencies, the siblings would not legally be considered a year older until March 1st on non-leap years, but in 2020, we can officially say, “Happy Actual Birthday, leaplings!”

February 30th? This even rarer date occurred in Sweden and Finland in 1712, when they added an extra Leap Day to February to help catch up their outdated Julian calendar with the new Gregorian calendar. There is, however, one race of people who celebrate February 30th every year: Hobbits. The wee folk of J.R.R. Tolkien’s Lord of the Rings universe observe twelve 30-day months every year—including Solmath (translated in the text to February). That’s definitely one of the things you missed when reading Lord of the Rings for the first time.

7. There is an official Leap Day cocktail

And it’s called…the Leap Day Cocktail! This colorful cousin of the martini was invented by pioneering bartender Harry Craddock at London’s Savoy Hotel in 1928. According to the 1930 Savoy Cocktail Book, “It is said to have been responsible for more proposals than any other cocktail ever mixed” (see: Sadie Hawkins Day above). Whether or not you’re in the market for a freshly soused spouse, you can make your own Leap Day cocktail with Craddock’s original recipe:

Shake, serve, garnish with a lemon peel, and enjoy the flood of bittersweet flavors. It’s like a marriage, in your mouth!

8. Not thirsty? Celebrate Leap Day with travel deals and a rare French magazine.

How does one celebrate a holiday that’s not really a holiday? By shopping, obviously. Many businesses observe the rarity of Leap Day by offering massive deals. Take a minute to check in with any restaurants, hotels, or cruise lines you’ve been curious about; chances are, they have a promotion running. And if your travels take you to France, pick up a copy of the rare La Bougie du Sapeur, a French parody newspaper only published once every four years on Leap Day. Newsstand copies sell for four euro apiece, but generous investors can buy a lifetime subscription—only 100 euro per century.

9. Is February 29th good luck or bad luck? Depends on who you ask!

According to an old Scottish aphorism, “leap year was ne’er a good sheep year.” The superstition that Leap Days are particularly lucky or unlucky has been debated through history and across cultures, and there’s still no clear winner. For one thing, it’s bad luck if you’re a prisoner on a one-year sentence that spans a Leap Day. Also, bad news if you work on a fixed annual salary; no extra pay for that extra day. On the other hand, Leap Day is great luck if you’re on a fixed monthly rent (one free day of living!), or if you’re Hattie McDaniel, in which case February 29th, 1940 is the day you became the first African-American to win an Oscar, for your role as Mammy in Gone With the Wind.

Will February 29th, 2020 be lucky or unlucky? You’ll just have to live through it and see.