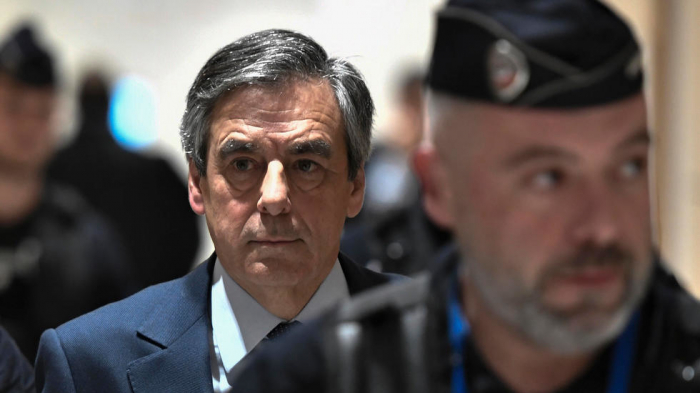 The allegations that Fillon, a fiscal conservative, paid his wife 613,000 euros net ($700,000) in public money over 15 years for a fictitious job knocked the frontrunner out of the race for president in 2017, facilitating the rise to power of Emmanuel Macron.

As the two-week trial of the 66-year-old politician reaches a close, prosecutors asked the Paris court to give him a five-year sentence, with three years suspended, and give his Welsh-born wife Penelope, 64, a three-year suspended jail term.

They also recommended that the couple be fined 375,000 euros. The verdict may only be announced in several months.

The charges against the pair and a third defendant, Marc Joulaud, who stood in for Fillon in parliament when he was a cabinet minister and also hired Penelope as an assistant, carry a maximum term of 10 years in prison.

The Fillons deny pilfering state coffers for their personal enrichment, insisting that Penelope, a discreet figure who shunned the limelight, did real work for the politician in his rural Sarthe constituency.

The defence failed to produce much documentary evidence of her efforts during the trial but summoned several witnesses who assured she had played a key role.

“Penelopegate”, as the affair was dubbed by French media, caused a major upset during the final weeks of the 2017 presidential campaign.

Fillon, who had been tipped to win, crashed out in the first round of voting in the wake of the allegations – an historic defeat for the French right.

A defiant Fillon, who had campaigned as a man of integrity in a tainted political field, vowed to use the trial to clear his family’s name.

Penelope told the court she spent a lot of time sorting her husband’s mail, attending public events near their rural manor and gathering information for his speeches.

But for the prosecution, her efforts amounted to no more than “the social role of a (politician’s) spouse.”

In addition to the parliamentary job, Fillon is also charged over payments to Penelope from a magazine owned by a billionaire friend of his, Marc Ladreit de Lacharriere.

The case shone a light on the rampant nepotism within the French political class, an issue at the heart of the 2018/2019 “yellow vest” anti-government protests.