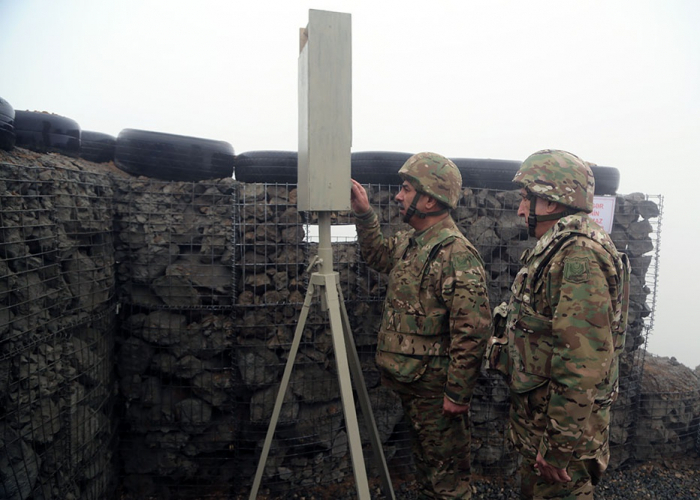 After getting acquainted with the conditions created in the military unit for military personnel, storages for combat armored vehicles, the vehicle park, the officer dormitory, and soldiers’ barracks, the boiler room, the laundry room, the medical point, the food and clothing warehouse, and other office and administrative premises were viewed.

The withdrawal of military equipment by a training alert to the area in accordance with the order of the Minister of Defense was successfully completed.

After hearing reports on the operational situation on the line of contact of the troops and getting acquainted with the situation in the units, Colonel General Z. Hasanov and Colonel General M. Aliyev observed the enemy’s foremost positions. The Minister of Defense gave relevant instructions to maintain the constant combat readiness of the units.

Then a monument that erected in Horadiz in memory of shehids (martyrs) who fell in the April battles was visited, flowers were laid and tribute was paid to the memory of shehids who sacrificed their lives for the independence and territorial integrity of our country.

The Minister of Defense visited the front line, has met with servicemen who are serving in combat positions in the Leletepe direction and got acquainted with the conditions of their service. During the meeting with the military personnel, Colonel General M. Aliyev, speaking about the large-scale military reforms carried out under the leadership of the Supreme Commander-in-Chief, as well as improving the social conditions of servicemen, noted that these issues are constantly in the focus of attention of the country's leadership.

In the end, the Supreme Commander-in-Chief’s congratulations on the occasion of the Novruz holiday were conveyed to the military personnel. Valuable gifts were presented to the servicemen who are serving in the front line and a conversation was held with them at the festive table.