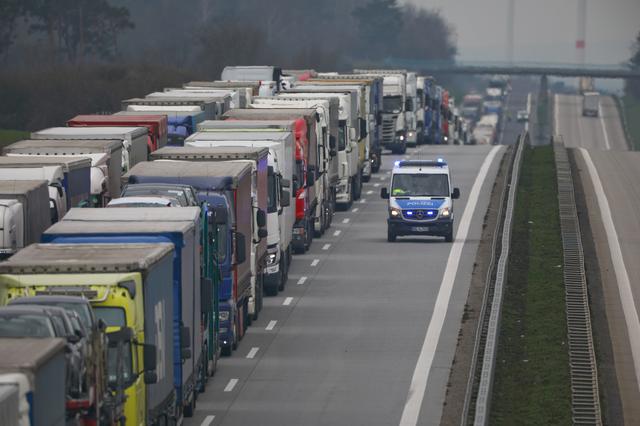 The European Union urged its 27 members on Monday to unblock their borders and allow freight vehicles to cross from one country to another within 15 minutes to ensure the flow of basic supplies and medical equipment.

“This weekend we had some crossing points with more than 40 kilometers of queues. This is a waiting time of up to 18 hours. This has to stop,” she said.

Road transport, which accounts for 75% of freight shipments within the EU, has been particularly hit, notably at the Polish-German frontier after Warsaw’s decision to shut its borders to non-Poles, leaving Latvians, Lithuanians and Estonians unable to return home.

German foreign minister Heiko Maas said on Monday many of the problems on that border had since been resolved and queues of traffic were now much shorter.

The EU executive has asked EU countries to designate major crossing points as “green lane” border crossings, including for rail, sea and air transport and on waterways.

Passage across such borders, the Commission said, should not exceed 15 minutes, including any checks or health screenings of transport workers. Health screenings should essentially take the form of temperature measurements, it said.

Additional crossings should be opened exclusively for goods transport if those designated become saturated.

The green lanes should be open to vehicles carrying any kind of goods. EU countries should also temporarily suspend any restrictions, such as bans on driving at weekends or during the night.

The Commission also said paperwork for transport workers should be reduced to enable them to cross borders more rapidly. For example, travel restrictions and mandatory quarantine periods should be waived for drivers not showing symptoms.

Drivers would still be expected to respect social distancing measures, such as staying in the cabins of their trucks to avoid social interaction.

The Commission’s guidelines also seek close cooperation with Britain, which is in a Brexit transition period, and non-EU countries such as Switzerland and those of the western Balkans.