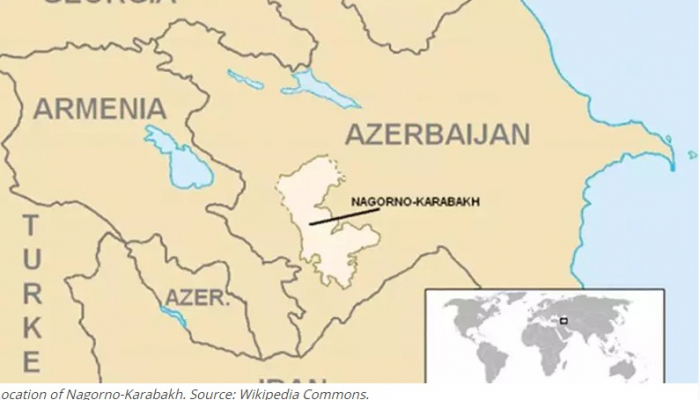 The correspondent of the Indonesian newspaper 'Jakarta Post', Veeramalla Anjaiah published an article calling for the cancellation of the "presidential" and "parliamentary" elections scheduled for March 31, 2020 in the so-called Nagorno-Karabakh Republic.

The article states that this unknown or little-known 'regime', strangely, will be hosting its 'presidential and parliamentary elections' on March 31 in the middle of the coronavirus pandemic.

Only Armenians know about this 'country'. Until this day, no country, including its main patron Armenia, has recognized the so-called republic.

In fact, the Nagorno-Karabakh region is an integral part of Azerbaijan. This was recognized by the whole world.

Armenian troops seized Azerbaijan’s  Nagorno-Karabakh region and seven adjacent districts during the 1991-1994 war which killed some 30,000 people and turned one million Azerbaijanis into refugees and internally displaced persons.

The Armenian troops told the local militia to declare themselves as an independent country in so-called Nagorno-Karabakh Republic.

During the war in 1992, Armenians committed many atrocities in a town called Khojaly, including genocide and ethnic cleansing against ethnic Azerbaijanis, and evicted around 40,000 Azerbaijanis from Nagorno-Karabakh.

The author states that, Armenia will be sending 300 election observers to Karabakh despite the threat from the COVID-19 pandemic. Some of these observers may spread the coronavirus.

According to the worldometers website, as of March 29, there are 424 infections in Armenia. So far, three people have died from COVID-19. The virus is spreading rapidly to many towns and cities. Officially, there are no COVID-19 cases in Nagorno-Karabakh, but many people suspect the virus is already there and spreading rapidly.

“As an elected representative, I urge the Armenian community of the Nagorno-Karabakh region of Azerbaijan to strictly observe personal hygiene rules, such as self-isolation and social distancing, to protect themselves from coronavirus. I am sure that after the end of the Armenian occupation, the Azerbaijani state will restore the health infrastructure in the Nagorno-Karabakh region of our country and both communities will be able to use the capabilities of a medical system meeting modern standards,” Ganjaliyev said.

Besides, the article states that although Pashinyan asked Armenians to refrain from traveling to Nagorno-Karabakh and vice versa, the election authorities are insisting that elections will go ahead on March 31.

'Armenians in both Armenia and Nagorno-Karabakh must realize that the occupation of Azerbaijan’s land, including Nagorno-Karabakh, did not bring any major benefits. It brought only economic hardships and made their country heavily debt ridden. Hundreds of thousands of talented and skilled workers are leaving the country every year. Armenia is now one of the most militarized countries in the world,' the journalist states.

'For many centuries, Azerbaijanis and Armenians lived in peace and harmony. If Armenia makes peace with Azerbaijan, it will benefit a lot in many ways. It can allocate the money that it is using now on weapons for economic development and prosperity.Canceling the elections in Nagorno-Karabakh, for peace and everybody’s health, will be the first step in that direction,' the article emphasizes.