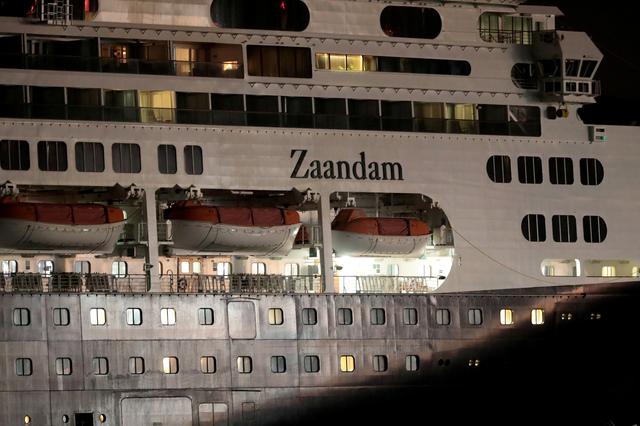 A Dutch cruise ship that has been in limbo since cases of the coronavirus were confirmed onboard faces an uncertain welcome at its planned destination in Florida, where the governor says he does not want sick passengers “dumped” on the state.

Holland America Line’s MS Zaandam was allowed to pass through the Panama Canal on Sunday. It had been stuck off Panama’s Pacific coast after the company announced the vessel had confirmed cases of the coronavirus on board and that four guests had died.

Company president Orlando Ashford urged authorities to allow people off the ship, describing the situation as a “test of our humanity.”

Zaandam guests that passed screening - nearly two-thirds - were moved to its sister ship Rotterdam before transiting the canal. Both ships are now bound for Fort Lauderdale but it remains unclear who will be allowed to disembark in Florida, where concerns about the coronavirus are mounting.

“We cannot afford to have people who aren’t even Floridians dumped into South Florida using up those valuable resources,” Florida Governor Ron DeSantis told Fox News on Monday, referring to the state’s medical facilities and hospital capacity.

DeSantis told a news conference on Monday the best solution was to send medical help onto Zaandam.

But in a blog posted on the Holland America website, Ashford urged authorities to show compassion.


“We are dealing with a ‘not my problem’ syndrome,” he said. “The international community, consistently generous and helpful in the face of human suffering, shut itself off to Zaandam.”

As of Monday, 76 guests and 117 crew on Zaandam had an influenza-like illness, including eight people who have tested positive for the coronavirus, Ashford said.

Holland America said it was still finalizing details of where and when guests would disembark and that it was in touch with embassies and governments.

Florida lawmakers on Tuesday were deadlocked over whether to let Zaandam dock, with some officials requesting more information before making a decision.

Representatives of Holland America, a unit of Carnival Corp, health experts, the U.S. Coast Guard, and the Broward County Sheriff’s Office in Florida have appeared before the Broward County Commission to decide the fate of the ships.

Before the passenger transfers, guests on the 238-meter (781-foot) Zaandam said the ship had over 200 British nationals on board, as well as Americans, Canadians, Australians, Germans, Italians, French, Spanish, Dutch and New Zealanders.

One of the four dead was Dutch, the Dutch government said.