Nicaragua’s president has vanished; his wife, the VP, says the coronavirus isn’t a problem 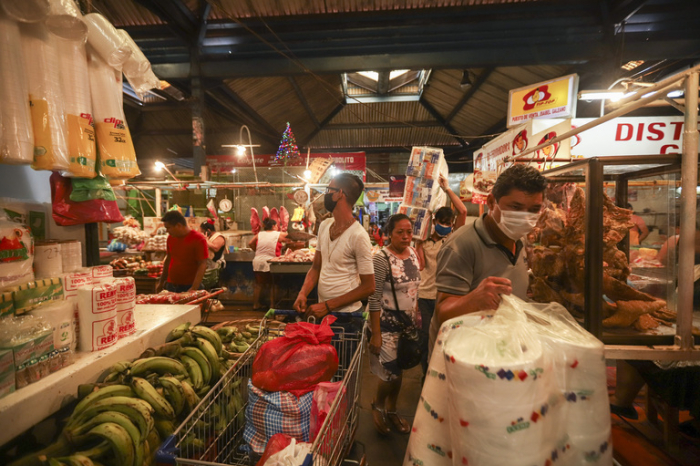 In the photo, a bunch of kids in swimsuits are sitting around a table at the beach. They’re drinking Cokes, waving, grinning.

“We have a unique country … and it’s best to enjoy it with your family!” wrote Juan Carlos Ortega, the son of Nicaragua’s president, in a tweet with the image of his children posted last weekend.

As much of Latin America shuts down in the face of coronavirus, Nicaragua is striking out as a radical outlier — urging citizens to go to the beach, enjoy holiday cruises, and turn out for Easter-season passion plays.

Rather than discouraging crowds, the Sandinista government is trying to manufacture them. It’s promoting festivities such as an event to distribute a sugary fruit treat — “the biggest almibar handout in Nicaragua.” Authorities haven’t closed borders, businesses or stadiums.

But what perhaps most sets the Central American nation apart is its president. Daniel Ortega doesn’t seem to be leading the charge against coronavirus. In fact, he hasn’t appeared in public for a month. The government says he’s still in control. But Nicaraguans are nervously wondering if the former Marxist guerrilla is ill, dead, or simply avoiding human contact.

Health and human-rights bodies in the hemisphere, meanwhile, are becoming increasingly alarmed at the government’s laissez-faire approach to the deadly virus.

The Inter-American Commission on Human Rights has called on Nicaragua “to recognize the extreme gravity of the situation, and immediately adopt steps to address and contain the pandemic.” Carissa Etienne, director of the Pan-American Health Organization, told reporters “we have concerns about the testing, contact tracing, about the reporting of cases” in Nicaragua, as well as “inadequate infection prevention and control.”

Nicaragua’s neighbors fear they could be hurt by spillover effects. “We’re worried about their approach, because the recommendations of the (World Health Organization) are for social distancing,” said Costa Rica’s president, Carlos Alvarado.

“Calling for marches and crowds of people goes against these recommendations,” he told CNN en Español.

On Thursday, Michael G. Kozak, the acting assistant U.S. secretary of state for Western Hemisphere Affairs, tweeted that “Daniel Ortega is nowhere to be found” as his country faces COVID-19. “Our hearts go out to the people of #Nicaragua who need leadership and factual information on this deadly pandemic,” he wrote. The U.S. government has sanctioned Ortega’s family members and the police in retaliation for what it calls their corruption and brutality.

Ortega, 74, is one of Latin America’s best-known politicians, the leader of the Sandinista revolution that toppled a right-wing dictator in 1979. He returned to the presidency in 2007 and has won re-election twice since then. His government has turned sharply authoritarian in recent years.

In Ortega’s absence, Vice President Rosario Murillo — also his wife — has been giving daily phone interviews to official media. Nicaragua has reported only eight cases of COVID-19 and one fatality. Officials say all the infections were acquired abroad.

“We don’t have community transmission, thanks be to God infinitely,” Murillo said on Thursday.

Costa Rica, Nicaragua’s less populous neighbor, has confirmed more than 500 cases of COVID-19. The Cuban government has said that three of its citizens who recently visited Nicaragua have tested positive for the virus.

Josefina Bonilla, a doctor and public health expert in Managua, the capital, said Nicaragua’s low number of cases reflected a lack of testing. The government hasn’t revealed how many people have undergone the exams, and private hospitals have been barred from conducting them.

Sign up for Evening Brief
Delivered weeknights, this email newsletter gives you a quick recap of the day's top stories and need-to-know news, as well as intriguing photos and topics to spark conversation as you wind down from your day.
Sign up
“If you only do a few tests, you’ll only have a few positive results,” Bonilla said.

She said Nicaragua enjoyed some advantages in confronting the health crisis. The country of 6 million is less densely populated than others in the region. Only a small percentage of citizens are elderly — the group that’s typically suffered the most fatalities. But it’s also the second poorest country in the hemisphere, after Haiti. If the virus spreads unchecked, Bonilla said, it could face a “catastrophic scenario.”

And that’s why the large gatherings of recent weeks are causing so much alarm.

Authorities have organized pro-government rallies, including one in mid-March dubbed “Love in the Time of COVID-19” to show “solidarity” with victims worldwide.

Even as other Central American countries shut down airports, schools and sporting events, Nicaragua has stayed open for business. Its soccer league has continued to hold matches, with some anxious players wearing masks. Public schools remained open until April 3, the start of an extended Easter break. The official tourism agency touted scores of Holy Week events, from fishing tournaments to beauty pageants.

Former foreign minister José Pallais said the government appeared to be afraid that the pandemic could damage the already listless economy. Once fast-growing, it cratered after the government violently suppressed pro-democracy protests in 2018. The crucial tourism sector was hit particularly hard.