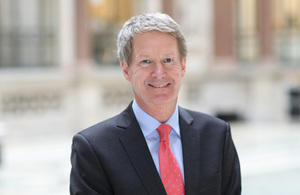 "This is a very sincere gesture. I thank Azerbaijan and the Heydar Aliyev Center and wish the Azerbaijani people good health. In this difficult time, it is very important to show solidarity and work together," he said.

Projection of the UK's flag was placed on the Heydar Aliyev Center’s building in Baku, Azerbaijan.

In a sign of Azerbaijan's solidarity with the international community in the fight against the spread of COVID-19, the flag of one of the states affected by the virus will be displayed daily at the Heydar Aliyev Center, which is a world-wide architectural monument.

Flags are changed daily in accordance with the order of the first letter of the country name in the English alphabet. In this way, the Heydar Aliyev Center expresses support and respect to the states and their peoples who have been severely affected by the spread of COVID-19.