Pandelection: Why the puppet regime in Karabakh staged so-called “elections” in state of emergency – ANALYSIS 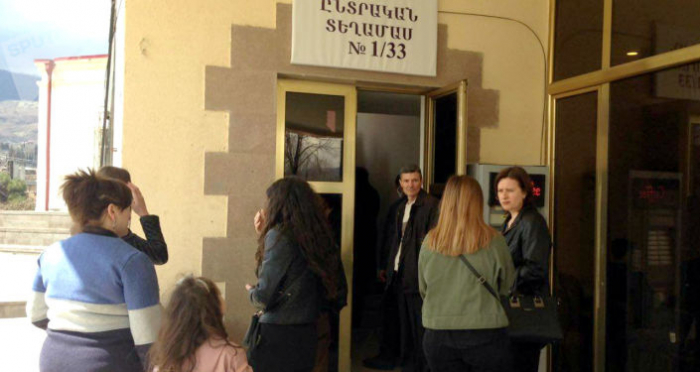 People are usually invited to the poll during elections. However, during an “elections” held yesterday, on the contrary, one of the candidates urged voters to avoid going to the polls. “I call on voters not to risk their health,” the candidate said.

We are talking about the “election” held in Azerbaijan’s Nagorno-Karabakh region occupied by Armenia. What’s the most interesting is that the day before, the criminal regime declared a “state of emergency” in the region due to the novel coronavirus (COVID-19).

The first and foremost question which comes in mind is, can’t the second round of the “elections” be held on May 12 – after the end of the “state of emergency.” After all, Armenia postponed the referendum, scheduled for April 5, due to the state of emergency. But this did not happen in Karabakh. Why?

The information alleging that about 45% of voters cast their ballots in the “elections” is false and unfounded because people did not want to go to the polls due to the tense pandemic situation in Karabakh. In this situation, the former “prime minister” of the criminal regime, Araik Arutyunyan, was declared the winner by a large margin (85%) before the counting of the votes was completed. His opponent was the “foreign minister” of the criminal regime Masis Mayilyan. Taking into account all this, we conclude that the criminal regime held the “election” between its two “ministers” after declaring a state of emergency that is not enshrined in its “legislation”. Why? What is the reason behind such an open and shameless game?”

Firstly, the minimal legitimacy of the local “leadership” serves official Yerevan and Nikol Pashinyan, the main producer of this play well. Pashinyan’s purpose was to make the person who is under his control, the head of the criminalist regime in Karabakh. That person would become more dependent on Yerevan if his legitimacy were low in the eyes of the local people. Araik Arutyunyan was “selected” like this. Now, he is forced to accept the dictation from Pashinyan to protect himself against the local oppositional pressures.

Secondly, the criminal regime held elections during pandemic risking the citizens’ health to launder the money. It is quite a lot to spend 10 million dollars on the elections in a small place like Karabakh with only 103, 000 voters during an emergency. If we divide it into the number of voters, this would be the most expensive elections in history. There is no mechanism in the “constitution” of the criminal regime to postpone the elections. Instead, they could cancel the elections and hold it when the pandemic ends. However, this case would not allow them to allocate this amount of money again.

Thirdly, as the whole world is busy with the pandemic, it is the ideal time to put the people in necessary places by silently holding elections. Perhaps, official Yerevan made its election plan in accordance with the current situation considering the possible criticism and pressures. But now, the world is in a tight corner to reflect on the elections of the ‘unrecognized’ institution. On the other hand, we can not say that the elections were successfully conducted as it was harshly criticized by international organizations and different countries.

Because of all above-mentioned reasons, the criminal regime in Karabakh held so-called “elections” during the pandemic without considering the health risks. It is not surprising: they always treat people like sacrificial lamb and use them to realize their games. The only real outcome of this game will be visible two weeks later when the number of coronavirus cases increases in Karabakh.