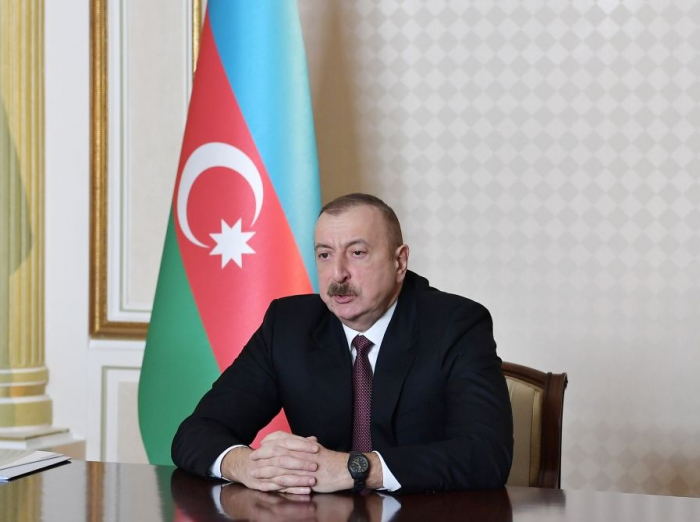 Reaction of the entire international community to far-fetched “elections” in the so-called “Nagorno-Karabakh republic” further strengthens our position, said Azerbaijan’s President Ilham Aliyev while making an opening speech at the meeting on the socio-economic results of the first quarter of 2020 through videoconference, AzVision.az reports.

“In connection with the conflict, I should also note that another major blow was recently dealt to Armenian propaganda and Armenia’s position on the conflict as a whole. In fact, they dealt this blow themselves. Of course, our focused activity and relations with international organizations have intensified this blow. We are talking about the so-called “election” of the so-called “president” in the so-called “Nagorno-Karabakh republic”. These so-called “elections” once again showed that no-one would recognize this illegal junta,” said President Ilham Aliyev.

He said that after the so-called “elections”, leading international organizations did not recognize them and made open statements about this.

The head of state pointed out that all these organizations did not recognize the so-called “election” and once again showed that Nagorno-Karabakh is an integral part of Azerbaijan.

“This has once again demonstrated – as I said earlier and want to say again – that Nagorno-Karabakh is Azerbaijan, an exclamation mark! But I want the people of Azerbaijan to know that one organization is not among these international organizations. I believe that everyone understands this – it is the Council of Europe, the Parliamentary Assembly of the Council of Europe, which has been doing everything possible for many years, for over 20 years, to denigrate and slander on Azerbaijan and undermine its authority. The Parliamentary Assembly of the Council of Europe is silent. Notice that all organizations, including European ones, have said that they do not recognize these elections. The unambiguous meaning of this is that Nagorno-Karabakh is Azerbaijan. Why is the Parliamentary Assembly of the Council of Europe silent? Why doesn’t it talk about that? The answer is clear. Because the anti-Azerbaijani forces gathered there, the pro-Armenian forces look at Azerbaijan as an enemy. All claims coming to us from this organization are irrelevant. I have said this before and I want to say it again: the decisions and resolutions adopted by them are nothing more than a piece of paper for me. I am not and never will be interested in the opinion of this organization about Azerbaijan. I want to draw your attention to another issue. There are rapporteurs on Azerbaijan, and they are also tight-lipped, they are not saying anything. As soon as an insignificant event takes place here, they sprinkle our country with lies and slander with foam at the mouth. Why are they silent now? After that, they have lost the moral right to be rapporteurs for Azerbaijan,” said President Ilham Aliyev.

The head of state pointed out that the people of Azerbaijan see everything perfectly well.

“They see that their ugly statements are not at all underpinned by the issue of democracy and the protection of human rights in Azerbaijan. The purpose of this organization is to denigrate and blackmail Azerbaijan, undermine its authority, and thus inflict a blow to the interests of our country. We are going our own way. I want to say this again: there is one way to resolve the Nagorno-Karabakh conflict, it is the restoration of the territorial integrity of Azerbaijan. The reaction of the entire international community to these far-fetched “elections” further strengthens our position,” said President Ilham Aliyev.

Speaking about international events, the head of state noted the extraordinary summit of the Cooperation Council of Turkic Speaking States held on the initiative of Azerbaijan in the form of a video conference.

“Last October, Azerbaijan assumed chairmanship of this organization. Such an initiative was put forward. I must say that the Turkic Council is the only organization today that held a summit at the level of heads of state related to the coronavirus. The thoughts expressed at the meeting, the mutual support, the solidarity and the Final Declaration adopted once again showed that our organization has a very solid foundation and we stand by each other on a difficult day. I believe that Azerbaijan’s initiative is a very appropriate and timely step, all my colleagues emphasized this,” said President Ilham Aliyev.