Fascist Solidarity: Who is member of EP who congratulated new "leader" of criminal regime - DOSSIER While the so-called 'elections' held by the criminal regime in Nagorno-Karabakh were condemned by almost all international organizations, one of the members of the European Parliament (EP) congratulated the winner of the ‘ election show’. Who does this? And for what purpose did this person want to ‘stand out’ from everyone?

Lars Patrick Berg, a member of Alternative für Deutschland (Germany) party, known for his radical right-wing views. He was the only member of the European parliament who congratulated the so-called "winner of the presidential election" held in the occupied territories of Azerbaijan.

During his visit to Armenia in November 2019, Berg called Nagorno-Karabakh "the cradle of Christianity" and ‘the tower of the Christian faith’ in an interview to armenpress.am. Besides, he also made absurd remarks during the interview, such as ‘Western Europe must contribute to peace negotiations to resolve the conflict in the Artsakh region and end tensions with Turkey.’ Those remarks clearly show that Lars Patrick Berg is also Islamophobic. 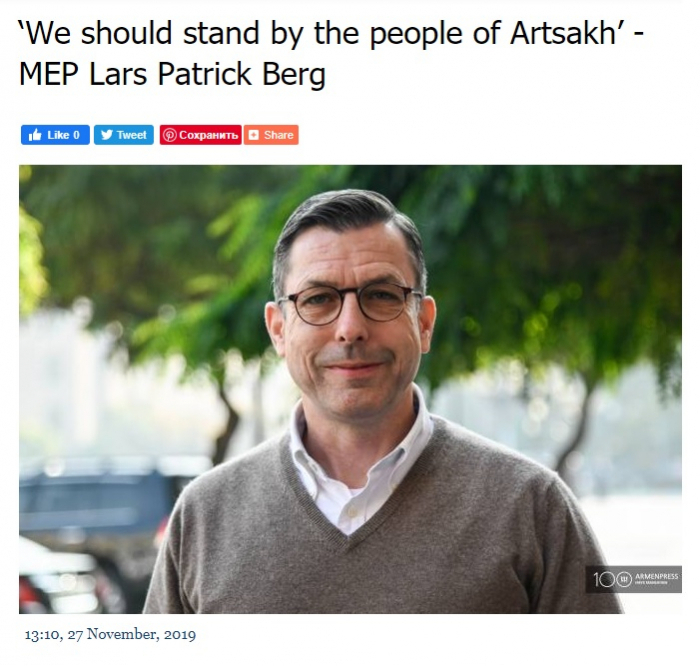 His islamophobic and anti-Turk stance is not surprising, because it has been reported thaat since his young age he actively been involved in various harmful groups promoting Islamophobia and Turkish hostility.

In response to idea of calling conservatives as Muslim-hating Nazis, Berg said that conservative groups in the European Parliament are not Nazis who hate Muslims. On the other hand, in one of his interviews on May 2017, he stated that Islamic ideology and propaganda were a serious threat to democracy and that it was important for the state to counter consistently this danger.

MP Berg's congratulatory letter to the criminal regime which is inspired by the ideas of Garegin Njde, who collaborated with the Nazis can also be understood as his acquittal of occupation, separatism, war crimes and ethnic cleansing.

As it is known, the AfD party, which is prone to radical right-wing tendencies such as neo-Nazism and is constantly criticized by local German media, is known as a populist, racist, and anti-Semitic and Islamophobic force in the country. The party is often accused of pursuing policies contrary to Germany's constitutional order. It is no coincidence that during the party's 2016 congress, held under the slogan "Islam is not part of Germany," the party called for a ban on Islamic symbols in Germany.

According to some information leaked to the media, the AfD was created by foreign special services. For this reason, sane people periodically organize protests against the political line of this party, which is ruled by various forces.

It is very symbolic that a representative of such a party sends a letter to the winner of the "election" held by the criminal regime in Karabakh: In fact, one fascist congratulates another fascist.